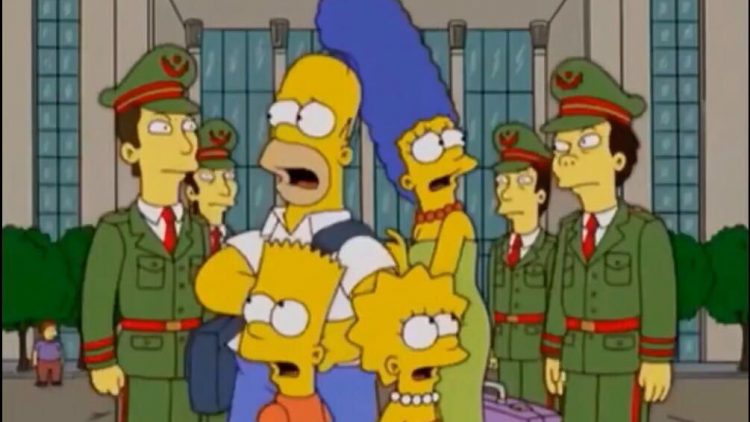 An episode of The Simpsons that ridicules the Chinese government is mysteriously unavailable to viewers in Hong Kong.

“It is the obligation of all companies that benefit from the shelter of a free society to reject authoritarianism in all its forms. Disney’s decision to censor the memory of the Tiananmen Square massacre is shameful,” tweeted Senator Ron Wyden (D-OR).

Part of the episode, in which the Simpsons travel overseas to adopt a baby, shows a sign in Tiananmen Square reading, “On this site in 1989, nothing happened.” Experts estimate hundreds to thousands of people were killed in Tiananmen Square in June 1989 during pro-democracy demonstrations that the government considered a threat to its one-party rule. The episode brings to light the fact that the Tiananmen massacre made headlines around the globe, but the Chinese government enacts online censorship to limit knowledge and discussion surrounding the events that took place.

The absence of the episode for Hong Kong Disney+ subscribers raises questions as to whether Disney is complicit in censorship demands by China.

“’It isn’t known if ⁦Disney⁩ re­moved @TheSimpsons⁩ episode un­der pres­sure, or whether it de­cided it­self to leave the episode out of its lineup when it launched Dis­ney+ in Hong Kong.’ Why no comment, ⁦@Disney⁩?” tweeted Ron Charles.

Though historically Hong Kong has enjoyed more freedoms than mainland China, the differences have shrunk in recent months, in part due to the passage of China’s 2020 National Security Law, criminalizing acts of subversion, collusion, and secession. Artistic license, social media posts, and textbooks, among other things, are subject to the recent crackdown under the new law.

“It appears the episode has suffered precisely the kind of censorship it was written to ridicule,” observed the Hollywood Reporter.