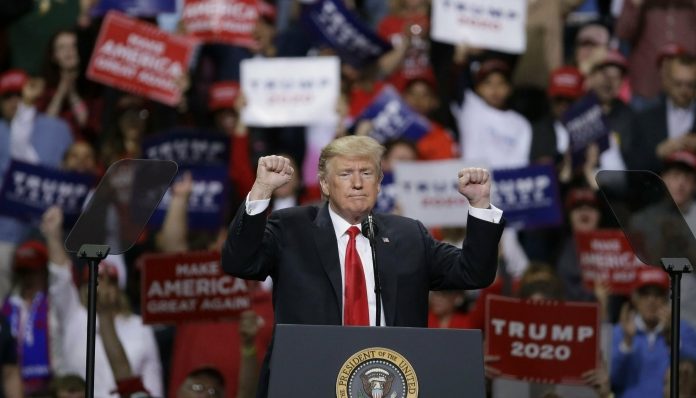 Donald Trump says he will start holding rallies next month hinting at a 2024 Presidential run.

A pair of rallies are scheduled to take place in June, as well as a possible rally on July 4, sources said. Official dates and locations for the rallies have not been set.

The tease of rallies and a possible run comes as a new 2024 GOP primary poll showed Florida Governor Ron DeSantis as Republican voter’s first choice – if Trump were not to run.

The poll released by Trafalgar Group found 35 percent of likely Republican primary voters were most likely to back DeSantis to be the party’s nominee, the most of any potential candidate polled.

The poll found that if Trump were to run, he would have the highest level of support from likely Republican primary voters, with 49.1 percent saying they would back him.

Trump said last week that he is “100 percent” thinking about running for president again in 2024 and would “certainly” consider DeSantis to be his running mate.

“He’s a friend of mine. I endorsed Ron, and after I endorsed him, he took off like a rocket ship,” Trump told Fox News host Maria Bartiromo. “He’s done a great job as governor.”

“A lot of people” would love a Trump-DeSantis ticket, he added.

“I look forward to doing an announcement at the right time,” Trump said in an interview with Candace Owens on May 4. “As you know, it’s very early. But I think people are going to be very, very happy when I make a certain announcement. You know, for campaign finance reasons, you really can’t do it too early because it becomes a whole different thing.”

“Otherwise, I’d give you an answer that I think you’d be very happy with,” he added. “So, we are looking at that very, very seriously, and all I’d say is stay tuned.”

Trump’s possible return to the campaign trail would most likely garner the support from many top Republicans including South Carolina Senator Lindsey Graham.

“It’s impossible for this party to move forward without President Trump being its leader because the people who are conservative have chosen him as their leader,” Graham said Monday.

Critics of the former President include Utah Senator Mitt Romney, who recently was booed at the Utah GOP convention on May 1. Wyoming Representative Liz Cheney has been the most vocal critic of Trump in the aftermath of the Jan. 6 Capitol Hill riot. Cheney was removed from her leadership position in the House on Wednesday and replaced by Trump ally and New York Representative Elise Stefanik on Friday.