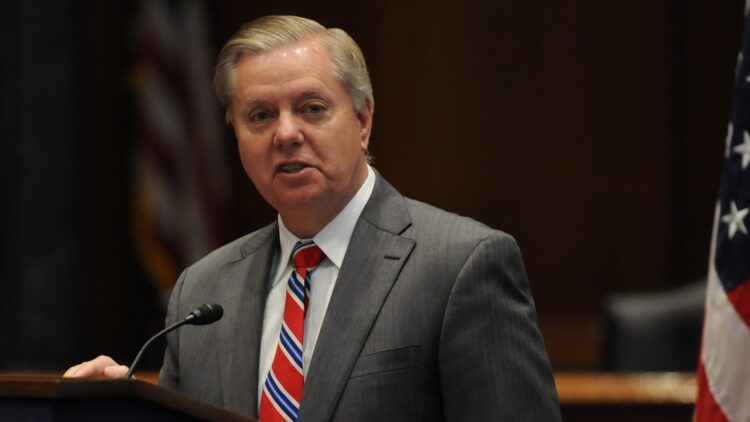 Senator Lindsey Graham said that it was “impossible” for the Republican Party to move forward without Donald Trump as its leader and that the former president’s critics will “wind up getting erased.”

“It’s impossible for this party to move forward without President Trump being its leader because the people who are conservative have chosen him as their leader,” Graham said.

“People on our side of the aisle believe that Trump policies worked, they’re disappointed that he lost. And to try and erase Donald Trump from the Republican Party is insane. And the people who try to erase him are going to wind up getting erased.”

“The most popular Republican in America is not Lindsey Graham. It’s not Liz Cheney. It’s Donald Trump,” he continued.

“He was the most consequential president for national security since Ronald Reagan. The people have chosen him, not the pundits,” he added.

Graham’s comments come after Trump teased a possible 2024 run in an interview with Candace Owens last week. “The answer is I’m absolutely enthused,” Trump said of the decision, “[and] I look forward to doing an announcement at the right time”.

“As you know, it’s very early. But I think people are going to be very, very happy when I make a certain announcement,” he added.

One of Trump’s loudest critics in the Republican Party is Wyoming Representative Liz Cheney, who was removed from her leadership role in the House Wednesday morning. Cheney has continuously made comments that have angered many in her Party regarding Trump’s character and involvement in the Jan. 6 Capitol Hill riot.

House Minority Leader Kevin McCarthy says removing Cheney from her position as House GOP Conference Chair is going to be necessary “in stopping the radial Democratic agenda from destroying our country.”

“These internal conflicts need to be resolved so as to not detract from the efforts of our collective team,” McCarthy wrote. “Having heard from so many of you in recent days, it’s clear that we need to make a change. As such, you should anticipate a vote on recalling the Conference Chair this Wednesday.”

Trump has endorsed New York Congresswoman Elise Stefanik to replace Cheney as the third most powerful GOP member of the House.

“The House GOP has a massive opportunity to upgrade this week from warmonger Liz Cheney to gifted communicator Elise Stefanik,” Trump said in a statement.

“Elise has intelligence, an endorsement from American Patriot Brandon Judd and the National Border Patrol Council, she has an A+ from the NRA, and she loves our Veterans. We need someone in Leadership who has experience flipping districts from Blue to Red as we approach the important 2022 midterms, and that’s Elise! She knows how to win, which is what we need,” he added.