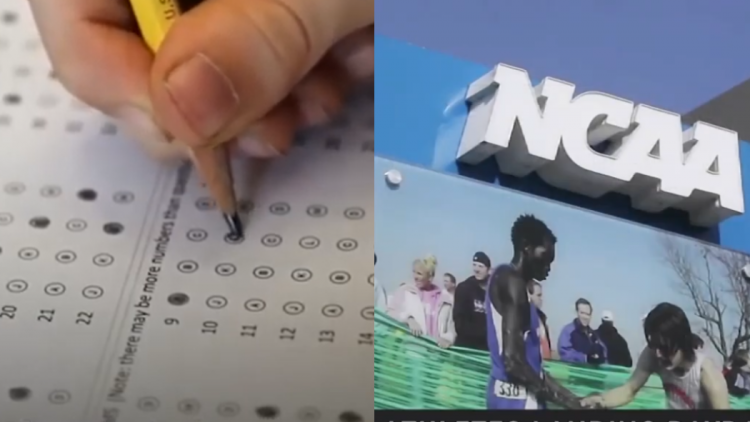 An NCAA task force recommended that standardized test requirements be axed for students aspiring to play college sports in Division 1 or 2, all in pursuit of racial equity.

The recommendation comes as a part of the NCAA’s 8-point plan to “advance racial equity” with the goal of improving “ways to engage student-athletes, particularly student-athletes of color.”

The Division I Committee on Academics and Division II Academic Requirements Committee will consider the recommendation at their next summit in February 2022.

“This work reflects the NCAA’s commitment to continually reviewing our academic standards based on the best available data and other relevant information,” task force chairman David Wilson, president at Morgan State, said in an NCAA release. “We are observing a national trend in NCAA member schools moving away from requiring standardized test scores for admissions purposes and this recommendation for athletics eligibility aligns directly with that movement.”

The National Association of Basketball Coaches fully supports the move away from standardized testing and touts the tests as racist.

“The days of colleges requiring the SAT or ACT are passing rapidly: more than half of all four-year colleges and universities will not require these tests for admissions in 2021, and more are dropping the requirement every week,” the NABC said in a previous statement.

“These tests should no longer be required in the initial-eligibility standards. The tests are again being recognized as forces of institutional racism, which is consistent with their history, and they should be jettisoned for that reason alone; moreover, pragmatics also support this change,” it continued.

In arriving at their recommendation, the NCAA task force consulted with various groups and organizations, including the Knight Commission on Intercollegiate Athletics, the National Association for College Admission Counseling, Division I and II member schools, the ACT, and the College Board which administers the SAT.

Joe Biden promised on the campaign trail in 2019 that he would eliminate standardized testing after being asked about their “history of racism and eugenics.”

The University of California is already moving towards eliminating standardized testing requirements after being subjected to a lawsuit that alleged that the requirements were unfair and a specific disadvantage to students of color.