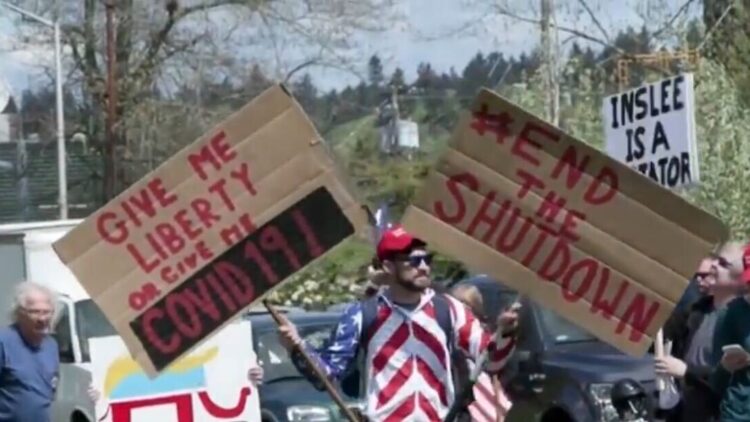 NBC is warning the public of sources of potential terror threats, including those who oppose the government’s Covid restrictions, based on a document issued by the Department of Homeland Security.

A screenshot of NBC’s “National Terrorism Alert” is garnering a lot of reactions, with some taking issue with the way it is framed. “Potential Terror Threats,” reads the header, and underneath it lists “opposition to Covid measures,” “Claims of election fraud, belief Trump can be reinstated,” and “9/11 anniversary and religious holidays.”

The Homeland Security statement that NBC’s alert was based on says, “threats include those posed by domestic terrorists, individuals and groups engaged in grievance-based violence, and those inspired or motivated by foreign terrorists and other malign foreign influences. These actors are increasingly exploiting online forums to influence and spread violent extremist narratives and promote violent activity. Such threats are also exacerbated by impacts of the ongoing global pandemic, including grievances over public health safety measures and perceived government restrictions.”

Further down, the document says, “extremists may seek to exploit the emergence of COVID-19 variants by viewing the potential re-establishment of public health restrictions across the United States as a rationale to conduct attacks.”

“DHS will continue to identify and evaluate calls for violence, including online activity associated with the spread of disinformation, conspiracy theories, and false narratives,” DHS added.

Reactions on Twitter were swift. “What percentage of Americans are potential terrorists now?” tweeted Seth Dillon.

“The government has declared your right to object to their covid measures as terrorism,” someone tweeted in response.

“I prefer not masking therefor [sic] I’m now a threat to National security,” said someone else.

“Free peoples begin their descent to unfreedom when they permit their leaders to grab powers in violation of their natural rights on grounds of public health and national security,” Benjamin Weingarten tweeted.

“This s*** is insane,” commented someone else.

“This is going to backfire on them big time,” agreed another.

“The graphic is very misleading. The bulletin issued by DHS was saying that what’s listed could lead to terror threats. NOT that the items themselves are the terror threats. Example: 9/11 celebrations are often a target for terrorists so the the DHS must be on high alert,” Geoff Pilkington tweeted.

NBC did not immediately respond when contacted for comment.