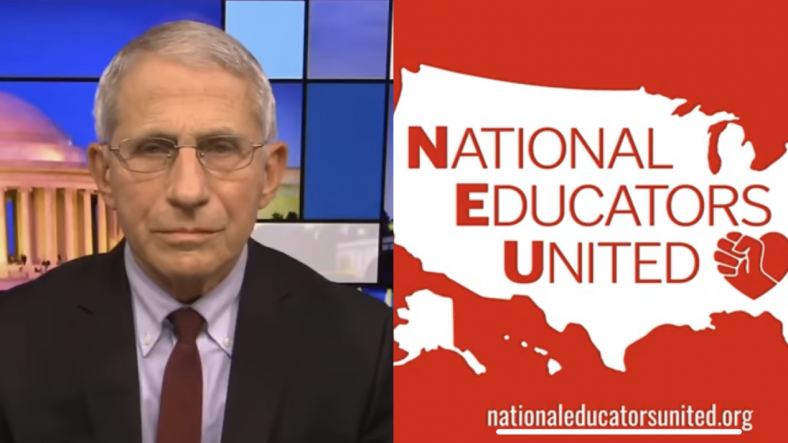 Even as Dr. Fauci admitted in an interview that more children are hospitalized “with” Covid than “because of” Covid, National Educators United pushes for nationwide school closures.

NEU also tweeted a link to a petition to President Biden, asking for signatures supporting, among other demands, “a national two-week pause of in-person learning, at minimum.”

Just this week, Dr. Fauci spoke to the omicron variant and current hospitalization rates in children.

“People have been pointing this out for months, but were drowned out by the panicked alarmists,” tweeted Dylan Housman.

“Now Fauci says this? Is this because pandemic politics have changed for the Biden admin?” asked Senator Ted Cruz (R-TX).

The NEU has yet to comment on Dr. Fauci’s assurance that the health situation for children is not as dire as the numbers make it seem. In fact, the grassroots organization has been blocking journalists and critics from their Twitter account, some suggesting that it is an attempt to shut down dissent to their agenda.

“Must have been an accident,” Corey A. DeAngelis tweeted sarcastically, with a screenshot showing that the NEU had blocked him after he had called attention to their attempt to close schools again.

“This is pathetic, hysterical misinformation,” tweeted Garion Frankel, in response to the NEU’s claim that schools are putting “millions of lives at risk.” He then tweeted a screenshot showing the NEU blocked him shortly thereafter. “That didn’t take long,” he said.

Fauci’s admission and the NEU’s call for nationwide school closures come as the Biden administration faces increasing criticism over their handling of the virus as opposed to the claims they made on the campaign trail leading up to Biden’s election.

“Look, there is no federal solution. This gets solved at a state level,” the President said Monday, just before meeting with some of the nation’s governors.

“But you said…,” tweeted one person with a screenshot of Joe Biden’s tweet from October 2020 saying, “We’re 8 months into this pandemic, and Donald Trump still doesn’t have a plan to get this virus under control. I do.”