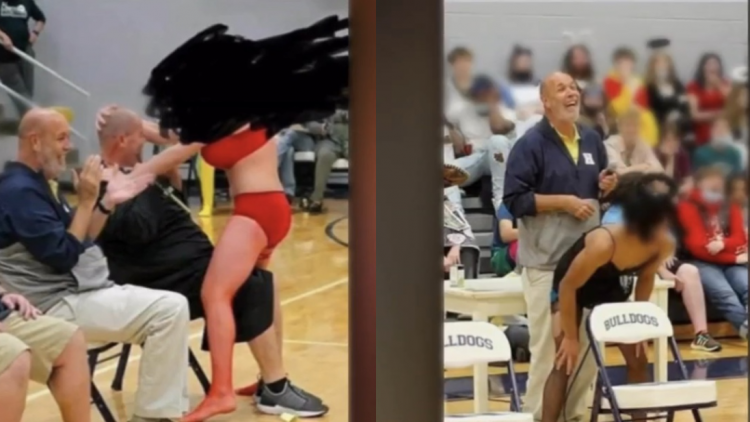 Hazard High School is under fire after reports and photos surfaced showing students dressed in Hooters costumes and teenage boys appearing to give lap dances to school staff.

“INSANE: Mayor of Hazard, KY who is also the principal of Hazard High School, held an assembly with a male pageant. The students came dressed in lingerie and gave lap dances to the staff,” reads a tweet on the popular Twitter account Libs of Tik Tok.

“The people responsible must be held accountable!” continued the Twitter thread, including disturbing photos that show students in scant clothing giving lap dances to staff.

“More images: Students dressed in Hooters costumes and bikinis. They also took turns paddling each other,” the account reported.

Principal Donald “Happy” Mobelini has reportedly been involved in other scandals as well. The Lexington Herald reported that Mobelini was present and chaperoning a school trip where underage students consumed alcohol and ended in the alleged rape of one of the female students.

There have also been reports that Mobelini drove students around while he was drinking and smoking. In addition, the school’s football team was caught earlier this year drinking on the field moments after Mobelini left the field.

“They’re actually trying to blame this on the students!!!

“Moving forward, a student activity committee will be developed to review all student led activities, which should prevent any such skits from being performed in the future. While we value our student’s [sic] creativity, we also must ensure that it is focused in an appropriate direction and will be more vigilant toward that goal in the future,” a press release from the school reads.

“They are basically promoting and approving pedophilia and blaming the kids smfh,” replied one Twitter user.

Photos of the event have been removed from the school’s social media.

Superintendent of Hazard Independent Schools Sonda Combs told The Courier Journal that the district “has a tradition of excellence and academics and everything we do, but the incident is being investigated and once the investigation is complete, appropriate action will be taken.”

“Kentucky law provides that school district superintendents are required to report instances of educator misconduct to the Education Professional Standards Board (EPSB). Therefore, if the investigation finds a certified educator likely violated the Kentucky Educator Code of Ethics, the superintendent is required to report this to the EPSB for potential action,” Konz Tatman, Kentucky Department of Education spokeswoman, said in a statement.