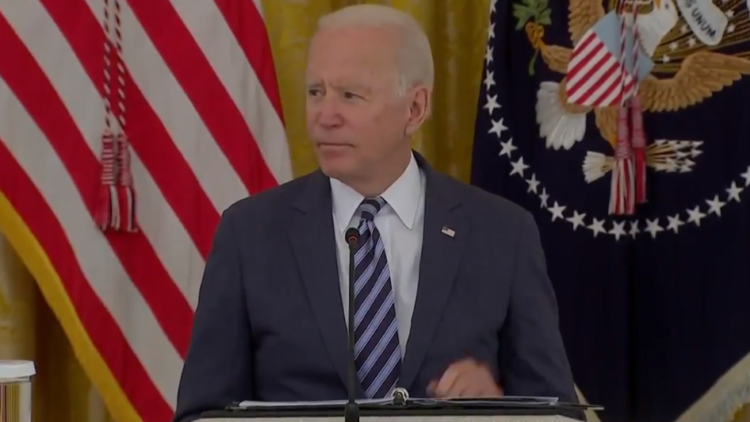 Biden announced his sweeping vaccine mandate, which forces employers with more than 100 workers to require COVID-19 vaccines for their employees or weekly testing at no charge to the workers. Biden promised to get any Republican governor “out of the way” if they resisted his mandate.

“Right now, local school officials are trying to keep children safe in a pandemic while their governor picks a fight with them and even threatens their salaries or their jobs. Talk about bullying in schools,” Biden said.

“If they’ll not help, if these governors won’t help us beat the pandemic, I’ll use my power as president to get them out of the way,” he added.

The backlash to Biden’s speech was widespread among many Republican politicians.

“I fully support continued efforts to increase vaccination rates across our nation, but the federal government mandates on private businesses are not the right answer,” Hutchinson said in a statement. “I have been consistent in the freedom of businesses to require their employees to be vaccinated, and I have opposed the government from saying businesses cannot exercise that freedom. The same principle should protect private sector from government overreach that requires them to vaccinate all employees.”

Governor Tate Reeves (R-MS) said Biden has “no authority” to require Americans to get a vaccine.

“The President has no authority to require that Americans inject themselves because of their employment at a private business. The vaccine itself is life-saving, but this unconstitutional move is terrifying. This is still America, and we still believe in freedom from tyrants,” Reeves tweeted.

“This is exactly the kind of big government overreach we have tried so hard to prevent in Arizona — now the Biden-Harris administration is hammering down on private businesses and individual freedoms in an unprecedented and dangerous way. This will never stand up in court,” Ducey tweeted.

“This dictatorial approach is wrong, un-American and will do far more harm than good. How many workers will be displaced? How many kids kept out of classrooms? How many businesses fined? The vaccine is and should be a choice. We must and will push back,” he added.

“President Biden is taking dangerous and unprecedented steps to insert the federal government even further into our lives while dismissing the ability of Iowans and Americans to make healthcare decisions for themselves,” Iowa Governor Kim Reynolds tweeted.

“Biden’s plan will only worsen our workforce shortage and further limit our economic recovery. As I’ve said all along, I believe and trust in Iowans to make the best health decisions for themselves and their families. It’s time for President Biden to do the same. Enough,” she added.

Governor Kevin Stitt (R-OK) vowed, “as long as I am governor, there will be no government vaccine mandates in Oklahoma.”

“It is not the government’s role to dictate to private businesses what to do. Once again President Biden is demonstrating his complete disregard for individual freedoms and states’ rights,” Stitt tweeted.

“My administration will continue to defend Oklahoma values and fight back against the Biden administration’s federal overreach,” he added.

“My legal team is standing by ready to file our lawsuit the minute @joebiden files his unconstitutional rule. This gross example of federal intrusion will not stand,” Governor Kristi Noem (R-SD) tweeted.