Fight breaks out at NYC restaurant over city vaccine mandate 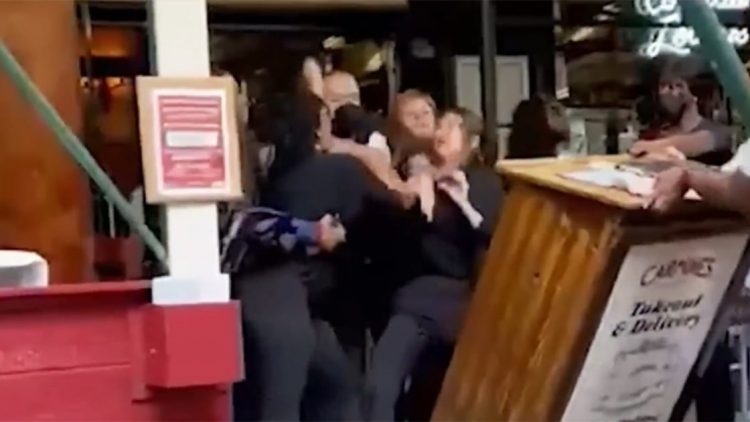 A brawl between patrons and a hostess at a well-known New York City restaurant broke out after diners were asked to show their vaccine passports as required under Mayor Bill de Blasio’s mandate.

“Oh my god! What the f**k!” the hostess at Carmines Restaurant in Manhattan is heard yelling as a group of women began attacking her after requesting to see their proof of vaccination to enter.

The trio of women arrested for the attack are all from the Houston, Texas, area. They have been identified as Sally Rechelle Lewis, 49, Kaeita Nkeenge Rankin, 44, and Tyonnie Keshay Rankin, 21.

They allegedly punched and struck the 22-year-old female hostess multiple times, causing her to be hospitalized for her injuries, according to law enforcement.

“It’s a shocking and tragic situation when one of our valued employees is assaulted for doing their job – as required by city policies – and trying to make a living,” Carmine’s said in a statement.

“Our focus right now is caring for our employees and the rest of our restaurant family. We are a family-style restaurant, and this is the absolute last experience any of our employees should ever endure and any customers witness,” they added.

The attack comes after New York City began enforcing its vaccine mandate this week. Diners are now required to show proof of vaccination to gain access to restaurants. Businesses that do not comply are hit with fines up to $1,000.

Proof of vaccination is also required for any hospitality, entertainment, fitness, and sporting events within the city.

Manhattan borough president Gale Brewer tweeted her response to the attack calling it “completely unacceptable.” She added that “there’s no place for this kind of violence to be perpetrated against our essential workers.”

Just over two-thirds of New York residents have received at least one coronavirus vaccine shot. Data shows lower vaccination rates among African-Americans, causing many to decry the mandates as discriminatory.

“As NYC’s Covid vaccine verification mandate goes into effect tomorrow, it will be one of the darkest days this City has ever seen. Make no mistake about it, banning over 60% of Black New Yorkers from all restaurants is systemic racism,” tweeted New York City resident and art dealer Eli Klein.

The Independent Chronicle was unable to reach Carmine’s for comment.