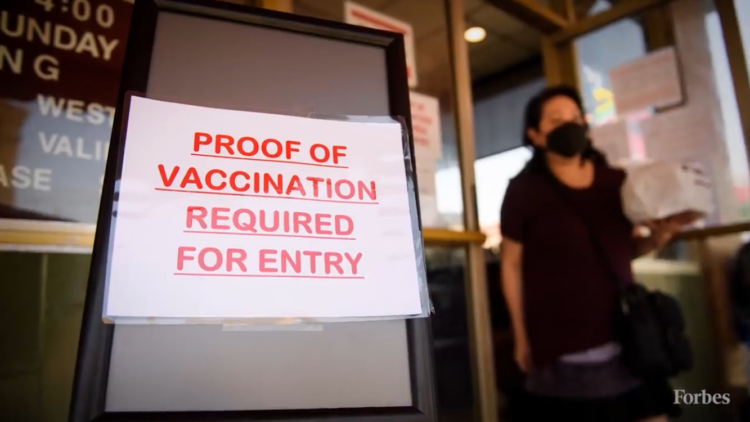 Concerns that the new vaccine mandate in New York amounts to de facto segregation are growing, given the low vaccination rate of African-Americans.

“As NYC’s Covid vaccine verification mandate goes into effect tomorrow, it will be one of the darkest days this City has ever seen. Make no mistake about it, banning over 60% of Black New Yorkers from all restaurants is systemic racism,” tweeted art dealer and publisher Eli Klein.

Vaccine data for New York City shows that only 28% of black New Yorkers ages 18-44 years are fully vaccinated, whereas 52% of white citizens and 48% of Latino residents in that same age category are vaccinated.

“It will be the most overtly #racist policy in NYC this century. #deblasioracist,” someone tweeted.

“Same type of thing our elites have been promoting since Tuskegee in 1932,” said someone else. “With this…I AGREE!!!! RACISM, CLASS DISCRIMINATION AND SEGREGATION…based and rootes in ableism…sad!!!!” tweeted another.

“Hard to believe we are taking this massive step backwards in the name of ‘progress,'” lamented someone else.

“Truly don’t understand how this is happening. Vaccinated people are getting and spreading covid, so how can this mandate stand?? And thats not even considering the blatant racism of marginalizing over 60% of black Americans in NYC. #jimcrovid,” Tweeted another.

“Well everyone in NY got what they voted for!! Democratic state, Democratic ran city, Democratic voters get Democratic policies,” pointed out one person.

RELATED: Group puts notices on doors of local businesses warning them not to require vaccines for entry

Not everyone believes the vaccine mandate is evidence of systemic racism, however.

“Yes, racial minority groups will be devastated by NYC’s tyrannical edicts. However, it is important to note that vaccine mandates are evil no matter which racial groups are most effected[sic] by them,” observed someone.

“Lol u had me until you invoked race. As if a policy is disatrous [sic] only if it disparately impacts a particular race,” someone replied.

“This isnt just about Black NYers. I mean it’s their choice not to get the vax!!!! This is about everyone’s freedom of choice, white, black, asian, Hispanic etc … Being taken! The media has done a great job in dividing us, we all need to stand together and fight this,” agreed someone else.

“At the end of the day, this will only end up harming businesses. They should be the ones speaking out about this,” said another Twitter user.

NYC’s COVID-19 vaccine mandate began Monday. The mandate requires New Yorkers to prove they have gotten at least one dose of the vaccine to participate in indoor activities such as going to the gym, eating out, or attending concerts or theater productions.

Even though black New Yorkers were infected at twice the rate of white residents and died in higher numbers, they are the most hesitant to get vaccinated for various reasons.

Many black citizens do not trust the government, especially with health matters, due in part to historical instances of gross medical abuse and experimentation on black slaves and citizens.

“Why are Black New York people not getting the jab?” someone wondered.

Some cited specifically the Tuskegee syphilis experiment, where black men were denied syphilis treatment by doctors responsible for their care and treatment.

Others wondered why they should trust the Covid vaccine when the government hasn’t produced a vaccine for HIV, which disproportionately affects the black population.

Still, others listed social injustices as reasons they don’t believe the government has their best interests at heart. Therefore, they prefer not to be first in line for anything new or experimental.

“Since when does America give anything good to Black people first?” said BLM activist Hawk Newsome, who is himself unvaccinated.