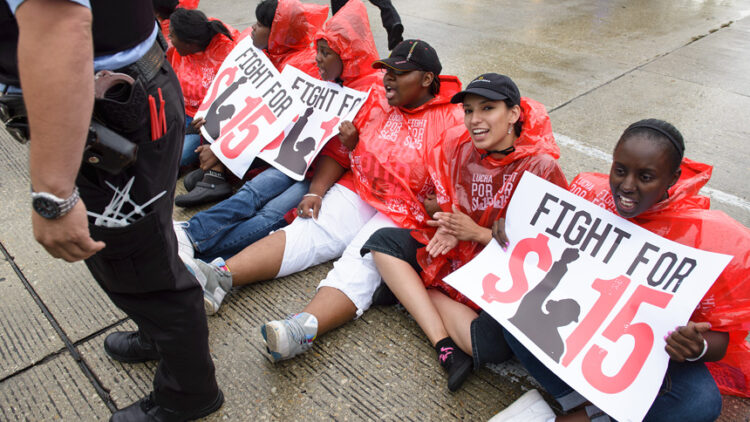 Fast-food workers across the country are organizing a strike to call for an increase in pay to 15$ per hour.

“I’m out here to demand $15 an hour for every worker in the country. After decades of low-paying jobs, I am finally making a living wage. I have 2 kids, so making $15 an hour is an absolute necessity to support them,” said Nathan Ruggles, an Amazon driver from Candler, North Carolina.

“But it was a fight to get Amazon to pay $15 in the first place. If we wait for all these companies to pay a living wage out of the goodness of their hearts, we will wait forever. Congress must pass a $15 federal minimum wage,” Ruggles added.

Recently, there has been a nationwide shortage of people willing to work in the fast-food industry. Organizers with “Fight for $15 and a Union” said bringing hourly pay to $15 would help alleviate the labor shortage.

“Increasing the minimum wage to $15/hr would boost the incomes of 32 million workers, including 59 percent of working families with incomes under the poverty line. Nearly one-third of Black workers would receive a raise, and one out of four workers who would benefit is a Black or Latina woman. According to researchers with UC Berkeley, raising the minimum wage in the 1960s directly led to a 20 percent drop in income inequality for Black Americans,” Fight for $15 and a Union said in a statement.

Nationally, workers in more than 15 cities will strike on Tuesday to demand Congress and restaurant companies like McDonald’s, Burger King, and Wendy’s raise minimum pay to at least $15 per hour.

“I stand with workers who are on strike for a $15 federal minimum wage because they are fighting for all of America. Millions of workers have been stranded at $7.25/hour for twelve years, and we can’t wait any longer,” said Rev. Barber II, Co-Chair of the Poor People’s Campaign.

The non-partisan Congressional Budget Office (CBO) found that if the minimum wage is increased to $15 per hour by 2025, nearly 1.4 million jobs would be lost. Companies would likely cut their workforce and employ technologies to replace the high cost of labor and transfer higher costs to consumers, leading to a decline in consumption.