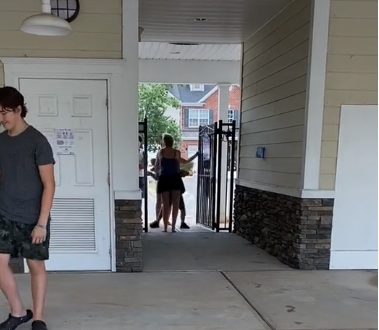 A white woman blocking a black boy from entering the gate to a swimming pool has been charged with assault on a child under 12.

The unidentified white woman can be seen blocking the entrance to the swimming pool at the beginning of the video. “He was here yesterday, ma’am, you know who I am!” Brown asserted. Brown later said the woman had let two white children into the pool area before preventing her son from going in.

Here is the original video!! It was deleted for violations of community guidelines!!! #repost

When the little boy attempted to slide through the gate area anyway, she laid hands on him to block his path. “Don’t you put your hands on my son!” she screamed, handing her baby to a man standing with her at the gate. She follows the white woman into the pool area, repeatedly screaming never to touch her son again.

The white woman’s responses during the exchange are inaudible, and she ends up walking away from Brown. No context was provided as to what initiated the conflict, and the woman’s motives are unclear.

Brown posted the video of the incident on her TikTok, and it now has over 600k reactions and nearly 13k shares. She followed up, saying that charges had been filed five weeks after the alleged assault.

The woman was charged with a misdemeanor for assault on a child under 12 years old and is due back in court on August 20.

Brown also claims that the woman attempted to get the police to believe that she was the victim and had been attacked by Brown. Brown said she was afraid law enforcement would believe the woman’s story over hers “based on just the way we look.”