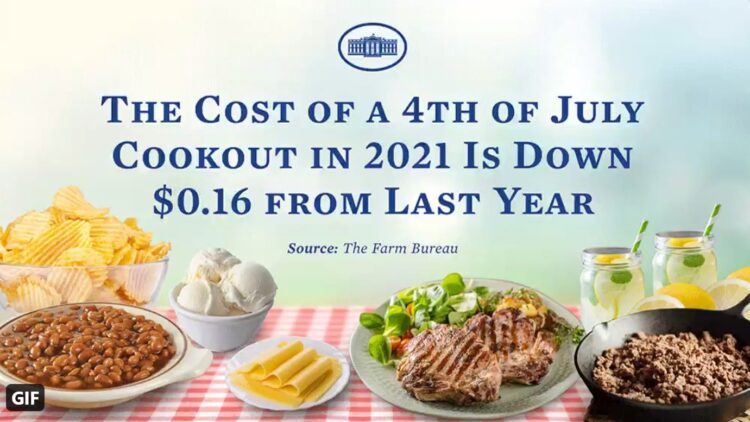 Countless Twitter users mocked the official White House account for posting a video message touting, that under President Biden, the cost of a Fourth of July cookout is down 16 cents compared to last year.

“Planning a cookout this year? Ketchup on the news. According to the Farm Bureau, the cost of a 4th of July BBQ is down from last year. It’s a fact you must-hear(d). Hot dog, the Biden economic plan is working. And that’s something we can all relish,” the pun-filled tweet said along with a video montage of various food items along with their costs.

Many of the responses to the video blasted the “out of touch” nature of touting a 16 cent decline in having a cookout, during a time when gas prices are skyrocketing across the country.

Another user posted a meme of the popular show Pawn Stars saying, “best we can do is 16 cents” along with the caption “Americans: “We want cheaper fuel, cheaper lumber, less taxes!”

Another user replied with the famous GIF of Kamala Harris on the phone saying “We did it, Joe.” With the caption “16 cents! Amazing work!”

“WTF is this Chinese propaganda? Anyone who actually shops, which you all apparently do not, can see their food budgets going through the roof. Mine is up almost 30% from this time last year. My gas is 42% higher, rent raised 28%, cost of living is crushing the middle class,” replied another user.

“Oh great, the cost of ketchup is down,” replied another, with a picture of a homeless person, hinting at the rampant homeless population in many Democratic-run cities and states.

“LOL. I still have tens of thousands in student loans, I can’t afford to buy a house as a first-time homebuyer in the skyrocketing housing market… but hot dog! I can save $0.16 on my fucking 4th of July groceries. Save a whopping 13% on pork and beans! Fantastic news,” said another.

“I voted for Biden, but if you do this again, I’m warning you,” replied someone else.

“Hear that, Millennials? You got a whole extra $0.16 this year. Why don’t you own homes yet?” said another.

“This is hands down the most pathetic flex in world history,” said another user.