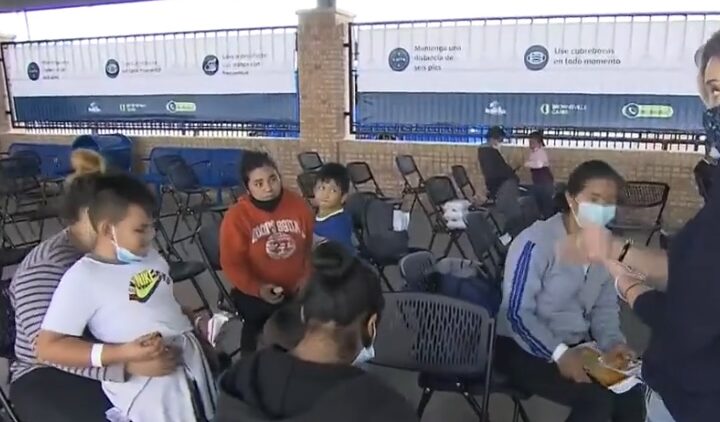 “Covid was widespread among children and eventually spread to many employees. Hundreds of children contracted Covid in the overcrowded conditions,” the whistleblowers, Arthur Pearlstein and Lauren Reinhold, say. “Adequate masks were not consistently provided to children, nor was their use consistently enforced. The manager said N95 masks were unnecessary.”

Pearlstein and Reinhold also allege that following the outbreak, federal detailees were regularly given written instructions from the HHS that told them to “make everything sound positive about the Fort Bliss experience, and to play down anything negative.”

The whistleblowers sent their first letter to four Congressional committees and government watchdogs on July 7. On July 28, they sent a second letter to the same committees and watchdogs. Pearlstein and Reinhold allege several abuses throughout both letters, including a shortage of undergarments and clothing for children.

“The shortage of underwear and other clothing for children that has been widely reported. The problem persisted for weeks and months,” Reinhold and Pearlstein wrote. “Countless children reported these shortages to detailees. Boys said they had no underwear at all, while most simply only had one pair with nothing to change into.”

Reinhold and Pearlstein say they offered to use their federal bank cards to purchase supplies for the children, but senior federal managers rejected the idea, saying they “don’t have time for this s–t.”

The whistleblowers also alleged instances of sexual harassment that girls in the shelter faced at the hands of the shelter’s construction workers.

“In another disturbing instance, construction workers lewdly and loudly gawked at girls as they walked outside to the meal tent,” the whistleblowers wrote. “Detailees were shocked at these acts of sexual harassment. They attempted to report the incident. Managers resisted taking their complaints.” After this, the whistleblowers reported the Covid outbreak.

“Every effort was made to downplay the degree of COVID infection at the site, and the size of the outbreak was deliberately kept under wraps,” they write.

“At a ‘town hall’ meeting with detailees, a senior U.S. Public Health Service manager was asked and refused to say how many were infected because, ‘if that graph [of infections] is going to The Washington Post every day, it’s the only thing we’ll be dealing with and politics will take over, perception will take over, and we’re about reality, not perception.’ All the manager would acknowledge was that several children had to be hospitalized,” they wrote.

The Department of Health and Human Services has not responded to the whistleblower’s report yet, nor has any senior official from the Biden administration.