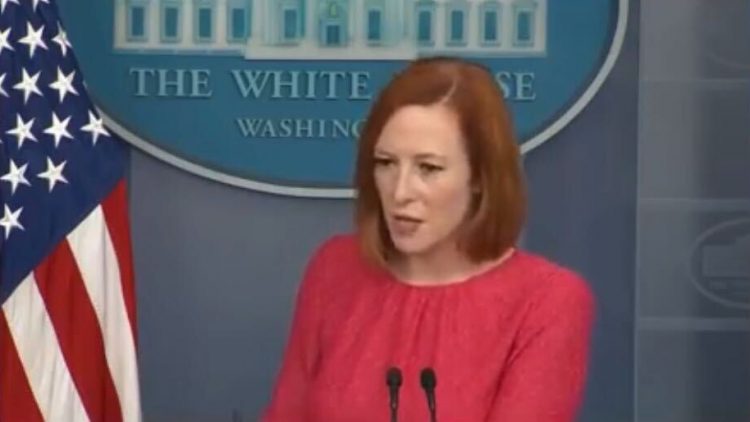 A Washington watchdog organization called for an investigation Friday into a comment Press Secretary Jen Psaki made in support of Virginia gubernatorial candidate Terry McAuliffe.

“OSC should commence an immediate investigation into the conduct described in this letter and take any appropriate disciplinary action against Ms. Psaki,” the complaint from Citizens for Responsibility and Ethics in Washington (CREW) reads.

Federal law limits campaigning activities that federal employees can engage in on behalf of any candidate for office, per the Hatch Act of 1939.

Psaki made the controversial comment that sparked CREW to ask for an investigation on Thursday during a press conference.

“We’re going to do everything we can to help former Governor McAuliffe, and we believe in the agenda he’s representing,” she stated.

CREW claims that Psaki was using her official position and authority to influence the results of an upcoming election.

“By mixing official government business with support of a candidate for partisan political office in the weeks before the election and engaging in political activity while on duty, Ms. Psaki appears to have used her official authority or influence for the purpose of interfering with or affecting the result of an election, political activity that is prohibited by law,” a letter from CREW reads.

The Hatch Act was first known as the “Act to Prevent Pernicious Political Activities,” and although it focuses primarily on preventing civil service employees in the executive branch from engaging in campaign activities, the president and vice president are exempt from it.

“Why does the media not hold @PressSec accountable for potential Hatch Act violations? She has twice advocated for political candidates from the podium. There is no problem in engaging in First Amendment political activity, but it must be done separate and apart from the podium,” she tweeted.

Psaki told CNN she would be more careful next time because “words certainly matter.”