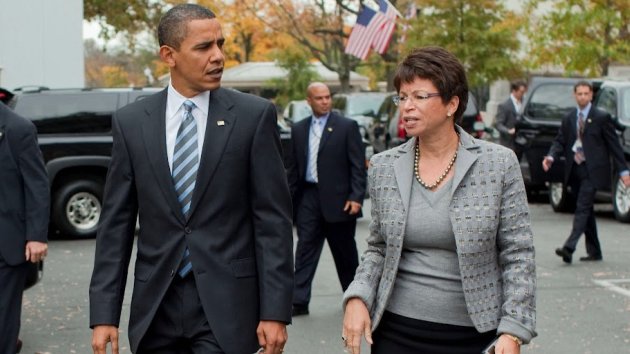 President Barack Obama walks with Senior Advisor Valerie Jarrett across West Executive Avenue to the West Wing of the White House, following a Small Business and Health Insurance Reform event, Oct 29, 2009. (Official White House Photo by Pete Souza) This official White House photograph is being made available only for publication by news organizations and/or for personal use printing by the subject(s) of the photograph. The photograph may not be manipulated in any way and may not be used in commercial or political materials, advertisements, emails, products, promotions that in any way suggests approval or endorsement of the President, the First Family, or the White House.

Valerie Jarrett, the former aide to President Obama, received criticism for tweeting a plea for donations in honor of the former president’s 60th birthday.

“My dear friend @BarackObama is turning 60 tomorrow. For his birthday gift, I’m asking you to chip in $6 or $60 to help us bring the Obama Presidential Center to life in Chicago. Donate at http://obama.org/60-for-60/ #HappyBdayObama,” Jarrett tweeted along with a lavish photo of her and Obama lounging at the White House.

Jarrett’s plea for donations came across as somewhat out of touch among many Twitter users.

“LOL. He is throwing a party with 700 people on a private beach in Martha’s Vineyard but please peasants, remember to give whatever is left in your savings accounts to his causes and remember— we’re all in this together!” Tweeted conservative commentator Candace Owens.

“After we destroyed your businesses & are crashing the economy with mass inflation.. please consider giving the pennies you have left to Obama who will be throwing a party with 500 guests, 200 servants in his 16k square foot ocean front mansion,” replied conservative commentator Melissa Tate.

“Throwing a party for 700 people at a posh mansion, sure everyone chip in your six bucks to help out the cause,” said another.

“You got some major stones asking the public for money for someone’s birthday as were in a financial crisis, but as long as you guys can have your parties!” Replied someone else.

“No thank you. We would prefer that such a mansion be placed elsewhere, and paid for by the wealth accumulated during your, and his, ‘public service,'” replied someone else.

“This may be peak Tone Deafness,” replied another.

“You are seriously out of touch asking for people’s hard earned money during such difficult times, for a multi-millionaire who owns 30 acres of waterfront property on Martha’s Vineyard,” said another.

Others wished the former president a happy birthday and thanked Jarrett for her service in government.

“Valerie, you are a wonderful and inspiring person. Thank you for your talk at the YWCA last year. I have your book and am looking forward to reading it. Thank you for all you do to lift up communities everywhere,” said another supporter.

Former President Barack Obama will hold his 60th birthday party at his mansion in Martha’s Vineyard with an estimated 700 guests set to be in attendance. Despite the latest recommendations from the CDC to limit gatherings as the deadly Delta variant continues to spread.