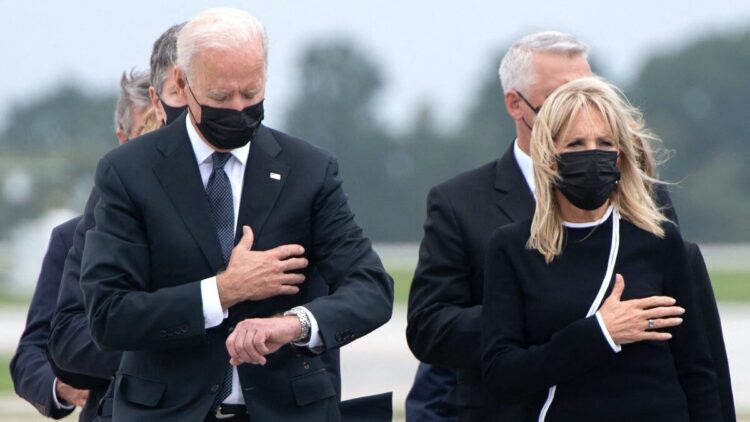 USA Today writer Daniel Funke was forced to update his “fact check” on President Biden appearing to check his watch during the dignified transfer of 13 slain service members from “partly false” to “missing context.”

“New fact check: A viral photo makes it look like President Biden checked his watch during a ceremony honoring U.S. service members killed in Kabul. But that’s misleading,” Funke tweeted along with his updated article.

Funke bases his “fact check” around memes on the internet comparing Biden’s actions to former President Donald Trump. However, Funke doesn’t mention that in the headline or his tweets. Just reading the headline appears to the reader that Biden, did not in fact check his watch, which video footage of the event clearly shows that he did.

“One popular post features two photos: one of Biden and one of now-former President Donald Trump. The picture shows Biden appearing to check his watch, Trump salutes as men in fatigues carry a casket draped in the American flag,” Funke writes.

Once confronted with the fact that video footage showed Biden checking his watch, along with first-hand accounts from Gold Star families who were there, Funke issued the update.

“Corrections & Clarifications: This story was updated Sept. 2 to note that Biden checked his watch multiple times at the dignified transfer event, including during the ceremony itself. The rating on this claim has been changed from partly false to missing context,” Funke wrote.

After claiming Biden didn’t check his watch until after the ceremony, Funke admitted that Biden checked his watch “multiple times during the ceremony.”

“Do you have any idea how harmful these lies are to our military community? You are a disgrace with zero credibility. We believe our Gold Star families and the video footage,” Code of Vets replied.

“A ‘fact’ ‘check’ claimed something 100% true was false. Deciding that propaganda was too much, even for them, they edited/updated their analysis of the 100% true thing to ‘misleading.’ Dangerous clowns,” said Mollie Hemingway.