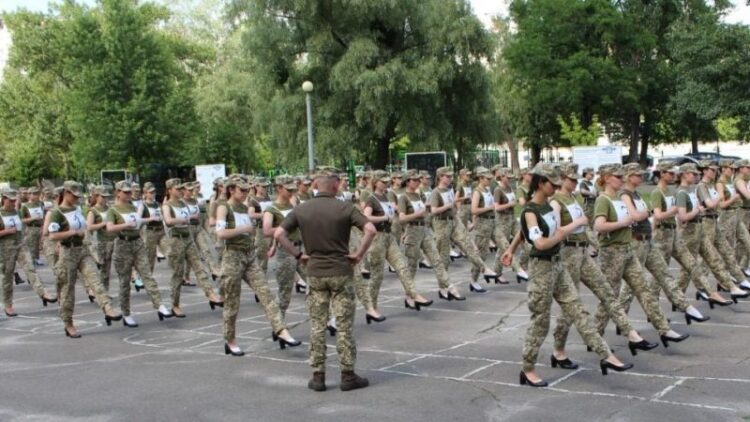 Women in Ukraine’s government and elsewhere have voiced their outrage over pictures showing female soldiers forced to march in high heels during a parade celebrating the country’s independence from the Soviet Union.

“The purpose of any military parade is to demonstrate the military ability of the army. There should be no room for stereotypes and sexism,” read a statement written by three female Cabinet members, including the minister for veterans affairs. Several other women serving in the government have issued statements of condemnation, including Vitaly Portnikov, who said “The story of a parade in heels is a real disgrace” and went on to accuse the military command of having a “medieval” mindset.

“Today, for the first time, training takes place in heeled shoes,” said cadet Ivanna Medvid. “It is slightly harder than in army boots but we are trying,” she added.

Another outraged member of the government, Maria Shapranova, accused the defense minister Andriy Taran of “sexism and misogyny.” Saying, “High heels is a mockery of women imposed by the beauty industry.”

In response to the widespread criticism, Minister Taran met with female cadets, vowing to make “ergonomic” footwear available for them as soon as possible. Taran also admitted that the high heels are “inconvenient for female servicemen to walk in.”

A 2016 report by the United Nations entitled “Invisible Battalion” labeled the Ukrainian Army as “sexist” over its treatment of female cadets. The report accused the military of treating women as “second class,” failing to supply proper uniforms and hygienic supplies.

In 2018, the military took several measures to respond to the criticism, including an expansion of combat roles for women.

Olena Kondratyuk, the deputy parliamentary speaker, says more than 13,500 women had fought in the current conflict against Russia and more than 31,000 women now serve in the nation’s armed forces with more than 4,000 female officers.