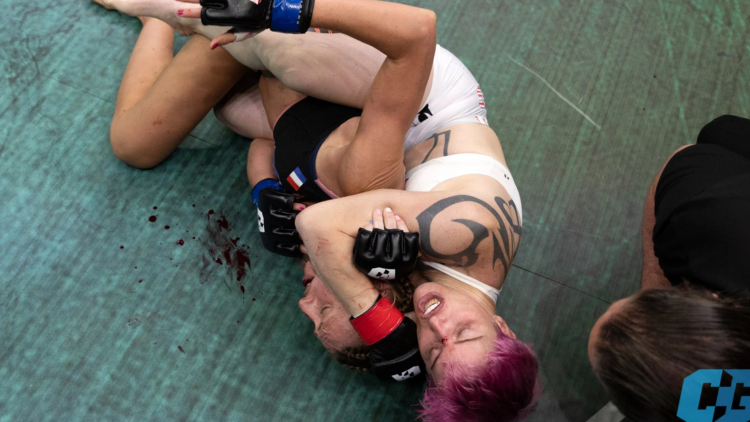 “In just competing in sports, I mean, especially mixed. It’s like she had testosterone for, who knows, 20 to 30 years of her life, and now I’m a girl. You could tell that’s a dude—a jacked girl. I mean, look at those arms,” O’Malley added.

Former UFC champion Michael Bisping also voiced his opposition to men fighting in women’s MMA in a recent episode of his podcast.

“I’m not here to talk about transgender [rights]… no judgment there, whatever… But I do believe that if you’re a woman that is trapped in a man’s body… there are certain things that you should have to give up,” Bisping said.

“If you have the body of a man, competing against girls or women, in a sport that you’re literally using your body to beat someone unconscious, has to be one of those things that you have to sacrifice,” he added.

“If you want to play volleyball, soccer, be my guest. But in a sport that you beat someone into unconsciousness or submission, that shouldn’t be allowed… It’s dangerous to women… It’s unfair,” Bisping continued.

McLaughlin was born a male and began transitioning to a female in 2010, after leaving the U.S. Army Special Forces. She recently beat Celine Provost only 3 minutes and 32 seconds into the second round.

McLaughlin began training in MMA a year ago after being cleared to compete against women when the Florida State Boxing Commission approved her testosterone levels. She’s previously said that she wishes to follow in the footsteps of Fallon Fox, the first transgender woman to fight in MMA.

She recently responded to her critics that claim she “cheated” in the match against Provost.

“Good morning, friends, supporters, and others! I’m getting a lot of variations of the same nasty messages calling me a cheater like I didn’t just get beat on for a round and a half,” the 38-year-old captioned an Instagram post that showed her having a black eye and facial bruises.

“Y’all need to show [Celine Provost] some respect and take your concern trolling elsewhere. She almost finished me more than once, and on scorecards, she definitely won that first round. This is the only post I’ll make about this,” she continued, adding, “Transphobes are just making my block hand stronger.”