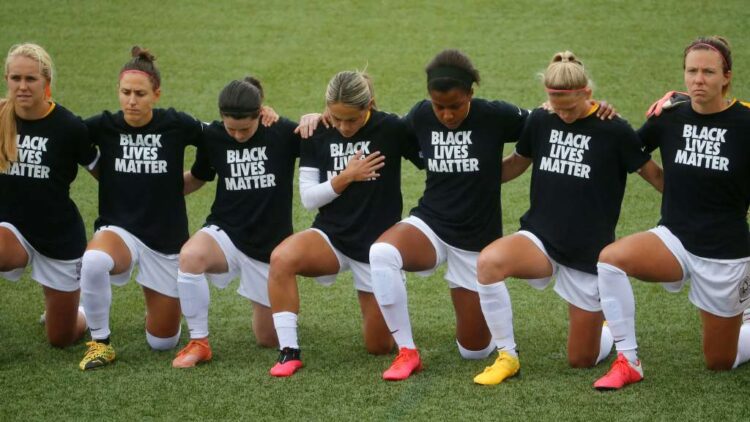 Players for the Utah Royals FC take a knee for the national anthem prior to their game against the Houston Dash during NWSL Challenge Cup at Zions Bank Stadium Tuesday, June 30, 2020, in Herriman, Utah. (AP Photo/Rick Bowmer)

The U.S. women’s soccer team broke their 44-game winning streak with a 3-0 loss against Sweden in their Tokyo Olympic opener after kneeling in support of the Black Lives Matter Movement.

“FINAL | Not the start we wanted but plenty of tournament to play. We go again on Saturday,” the official U.S. soccer Twitter account posted after the defeat.

“For us, it really feels right to stand up for human rights,” said Swedish defender Amanda Ilestedt, whose entire team also knelt. “It was a communication with the U.S. team before, so for us, it feels good to do that, and it is something we stand for as a team.”

Players from Great Britain and Chile also knelt before their match.

“As a squad, it’s been a subject that we’ve spoken about for a few weeks now,” Great Britain captain Steph Houghton said. “We feel so strongly that we want to fight all forms of discrimination and inequality, not just within sport but in the world.”

The International Olympic Committee barred social justice protests from the games in January of 2020, under Rule 50.

The U.S. Olympic and Paralympic Committee’s Athletes Advisory Council called to abolish Rule 50 last summer. The USOPC, after forming a racial and social justice council, followed in calling on the IOC to “end the prohibition of peaceful demonstrations” at the Games.

Following pressure from athletes who claimed the rule infringed on their freedom of expression, the IOC backtracked on the rule and decided to allow demonstrations before competitions in early July. The IOC maintained the prohibition of demonstrations during competitions and medal ceremonies.

Before Wednesday’s second soccer game at the Tokyo Stadium, New Zealand players also took a knee. Australian players stood with their arms around one another at the center circle after posing with the Australian Aboriginal Flag.

RELATED: US Olympic athlete Chelsea Wolfe says goal is to win so she can ‘burn a US flag on the podium’

Last November, members of the U.S. women’s soccer team wore Black Lives Matter jerseys and kneeled for the national anthem in the Netherlands to protest alleged racial inequalities in the United States and to announce solidarity with the Black Lives Matter movement.

“Today, we wear Black Lives Matter to affirm human decency. We protest against racial injustice and police brutality against Black people. We protest against the racist infrastructures that do not provide equal opportunity for Black and brown people to fulfill their dreams, including playing on this team,” the team said in a statement at the time.

“As the United States Women’s National team players, we collectively work toward a society where the American ideals are upheld, and Black lives are no longer systematically targeted,” they added.