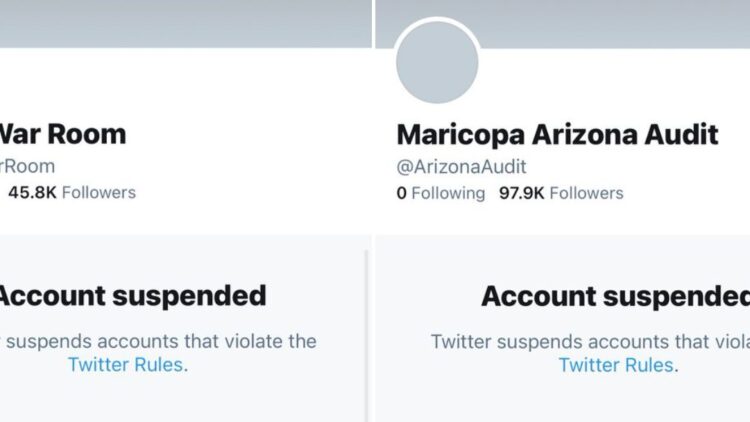 The Maricopa County audit account, Audit War Room, and accounts for audits taking place in Wisconsin, Nevada, Pennsylvania, Michigan, and Georgia have all been suspended, showing a message stating “Account suspended” and “Twitter suspends accounts that violate the Twitter Rules” when trying to access them.

“JUST IN – Twitter has just suspended the official Arizona Audit and Audit War Room accounts,” Disclose.tv tweeted with screenshots of the suspended accounts.

The Maricopa County Audit account had over 100,000 followers and would post updates on the progression of the forensic audit approved by the Arizona Senate.

“Canvassing is necessary. It is the one way to know if the problems are real problems or just clerical mistakes. There are ~ 74,000 ballots that came back but there is no indication that they were ever sent out by the county! From #FOIA shows logs don’t match!” Dr. Kelli Ward tweeted earlier this month.

On Monday, Arizona Senate President Karen Fann and Arizona Senate Judiciary Chairman Warren Petersen issued a new subpoena for the Maricopa County’s Board of Supervisors to turn over ballot envelope images, voter records, and routers or router images. The deadline for turning over the requested items is August 2.