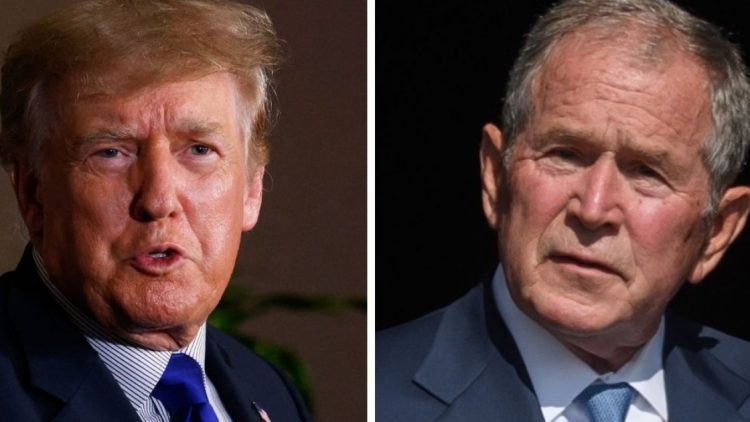 Trump blasted Bush as the “one who got us into the quicksand of the Middle East,” which cost the U.S. “trillions of dollars” and “killed nearly a million people.”

“The Middle East was left in worse shape after 21 years than it was when he started his stupidity,” Trump added.

“It ended with Biden’s most embarrassing in history withdrawal from Afghanistan, a total surrender, leaving $85 billion dollars of equipment and many young warriors’ lives behind.”

Trump also went after Bush for not pardoning Dick Cheney’s Chief of Staff, Scooter Libby. A federal grand jury indicted Libby regarding an investigation into the leak of the covert identity of Valerie Plame, a former CIA officer.

“Bush is the person who did not have the courage to give a pardon to his Vice President’s Chief of Staff, Scooter Libby, even though Cheney begged for him to do so. He wouldn’t, they didn’t talk for years,” Trump said.

“I didn’t know Scooter, but gave him a full pardon—not at their request, but because he deserved it. He suffered greatly. Former Vice President Cheney called to effusively thank me,” Trump added. “Now he is on the side of his daughter who is so bad for Wyoming and the United States that she is polling at record lows.”

Cheney, a long-time critic of Trump, is facing a primary challenge in her bid to retain her house seat. The race has morphed into a proxy war between the two factions of the Republican Party.

“Unlike RINO Liz Cheney, Harriet is all in for America First,” Trump said in a statement. “Harriet has my Complete and Total Endorsement in replacing the Democrats number one provider of sound bites, Liz Cheney.”

Cheney responded to Trump’s statement with a tweet, saying, “Here’s a sound bite for you: Bring it.”

Bush is set to headline a fundraiser for Cheney in Texas on Oct. 18.

Bush spokesperson Freddy Ford said in a statement that the former president “has historically helped a few key candidates and friends each cycle, so this one shouldn’t come as any surprise.”

“President Bush is impressed by Liz Cheney’s strength and vision, and he’s proud to support her,” he added.