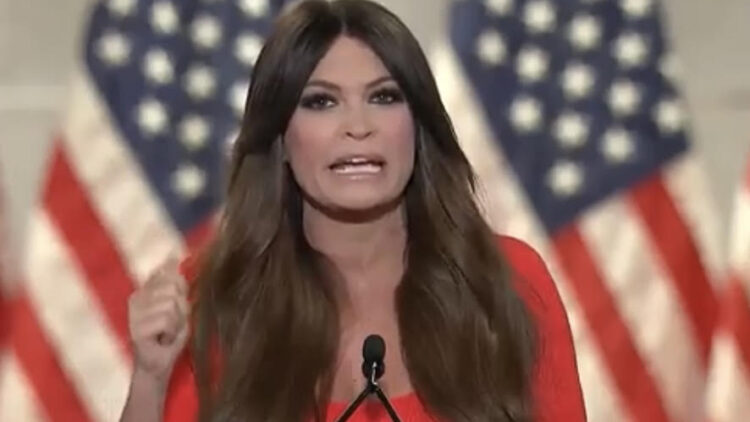 Donald Trump is reportedly becoming increasingly short with Kimberly Guilfoyle, girlfriend of Don Jr., and told those close to him that he finds her ‘annoying.’

Guilfoyle recently took a job with Eric Greitens’ campaign for Senate in Missouri as national campaign chair. Despite close family ties, an aide close to Trump says the former president would not give scandal-ridden Greitens his endorsement. Trump’s former pollster, however, shows Greitens with a 40-point lead over his next closest contender, Attorney General Eric Schmitt.

“Trump thinks that Kim is annoying,” one adviser said. “[He] thinks Greitens is problematic….he said, ‘Why the f— is she working for him?’”

Greitens, a former Navy SEAL and Purple Heart recipient, was once considered a rising star within the Republican party. However, he chose to resign from his governorship in 2018 after being accused of sexually assaulting and blackmailing a woman with whom he had an affair. Greitens has continued to deny the blackmail and assault allegations, though he did confirm that he had an affair.

“He took a picture of my wife naked as blackmail,” the woman’s ex-husband said. “There is no worse person.”

The woman involved alleged that Greitens invited her to his house, taped her hands to ‘rings,’ and then blindfolded her. She said she then saw a flash through the blindfold and remembers Greitens telling her she’d never mention his name. She also alleged that Greitens slapped her after telling him she’d had sex with her husband a few days prior.

In February 2018, Greitens was indicted on a felony charge of invasion of privacy, and in June 2018, he resigned as governor. Greitens had been set to face trial but was not required to do so following his resignation. The Missouri Ethics Commission also investigated him and his campaign for allegedly misreporting campaign funds, and while Greitens was personally cleared of wrongdoing in that case, his campaign was fined $178,000.

Greitens launched his Senate campaign on March 22, 2021, after Sen. Roy Blunt (R) announced he would not seek reelection in 2022. Several high-profile Republicans, including Rudy Giuliani and Bernie Kerik, have been campaigning for him and most recently attended a campaign event in Franklin County. Guilfoyle, who is no stranger to sex-related scandals herself, joined his campaign in April.

In 2018, Fox News paid Guilfoyle’s former assistant over $4 million to avoid going to trial after the employee drafted a complaint against her former boss, detailing allegations of sexual harassment. Guilfoyle’s departure from the network was abrupt and came as a surprise to viewers at the time. In 2018, however, reports revealed that she’d been let go following an investigation into her alleged inappropriate behavior.

“[Guilfoyle’s behavior] was provocative in a way that made you want to get away from this person,” a witness said. Two other Fox employees then corroborated the allegations, characterizing Guilfoyle’s relationship with her former assistant as “insane, abusive.”