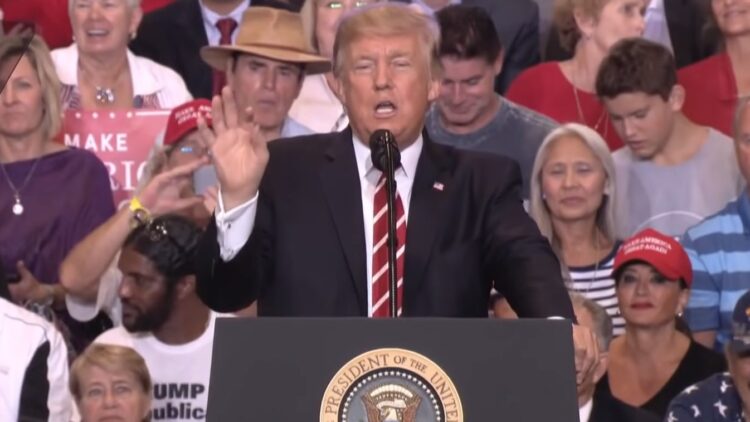 Former President Donald Trump has requested that Arizona Gov. Doug Ducey send either the state police or National Guard to provide security for the 2020 election audit in Maricopa County.

“The Republican Party is demanding that Governor Ducey of Arizona immediately provide large-scale security for the brave American Patriots doing the Forensic Audit of the 2020 Presidential Election,” Trump said Saturday.

Trump sent three tweemails through his Save America PAC over the past 24 hours praising the Republicans, who he says are “exposing the large scale voter fraud,” and calling out Gov. Ducey for not providing more security for the auditing process.

“Governor Ducey will be held fully responsible for the safety of those involved. State police or National Guard must be immediately sent out for protection,” Trump stated. “The Democrats do not want to have this information revealed, and they will do anything to stop it. Governor Ducey must finally act!”

The audit will consist of a recount of 2.1 million ballots cast in Arizona’s most densely populated county, as well as a forensic audit of the voting machines. It will take place in Veterans Memorial Coliseum in Phoenix and be managed by Cyber Ninjas, a cybersecurity firm from Florida.

Democrats sued to halt the audit but refused to pay a $1 million bond to pause the process temporarily. The judge ordered Cyber Ninjas to provide documents detailing its process.

Critics of the audit have pointed out that the owner of Cyber Ninjas, Doug Logan, has previously posted allegations of voter fraud, possibly indicating he is a biased party. Democratic state Sen. Martin Quezada insists the audit is a “dangerous” sham review.

“Why are the Democrats so desperate to stop this Election Fraud from being revealed? That answer is obvious! The Governor of Arizona, Doug Ducey, has been shockingly of zero help to the State Senate,” Trump said Friday. “He wants to ‘pretend’ the election was free and fair. What are he and the Maricopa County Commissioners trying to hide? Our country needs the truth of the scam 2020 Election to be exposed.”