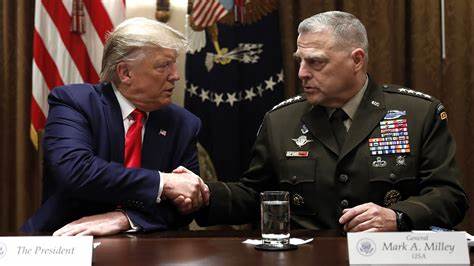 “The way Milley and the Biden Administration handled the Afghanistan withdrawal, perhaps the most embarrassing moment in our Country’s history, would not exactly instill fear in China,” Trump’s statement reads.

“Milley is a complete nutjob! The only reason Biden will not fire or court-martial Milley is because he doesn’t want him spilling the dirty secrets on Biden’s deadly disaster in Afghanistan,” Trump added.

Trump accused Milley of treason after it was revealed in a new book that Milley promised to give his Chinese counterpart advance notice if Trump ordered a strike against China. The book, Peril, is set to be released by former Watergate investigator Bob Woodward and political columnist Robert Costa.

The Pentagon denied any wrongdoing and Biden said he has “great confidence” in Gen. Milley despite the details revealed in the book.

Milley was reportedly concerned that Trump might order a strike that would lead to war with China before leaving office. He attempted to avert an armed conflict with China in a series of secret phone calls to his counterpart, Chinese Gen. Li Zuocheng.

“General Li, you and I have known each other for now five years. If we’re going to attack, I’m going to call you ahead of time. It’s not going to be a surprise,” Milley said to Li in one of the conversations, the book reads.

Trump said in his statement on Wednesday he was not informed of the calls.

“Milley never told me about calls being made to China. From what I understand, he didn’t tell too many other people either. He put our Country in a very dangerous position but President Xi knows better, and would’ve called me,” said Trump, referring to Chinese President Xi Jinping.

“I don’t think the president is looking for the guidance of members of Congress who stood by while the president of the United States and the leader of their party fomented an insurrection and many of them were silent,” she said.

Milley is expected to testify before the Senate Armed Services Committee about Afghanistan on Sept. 28.