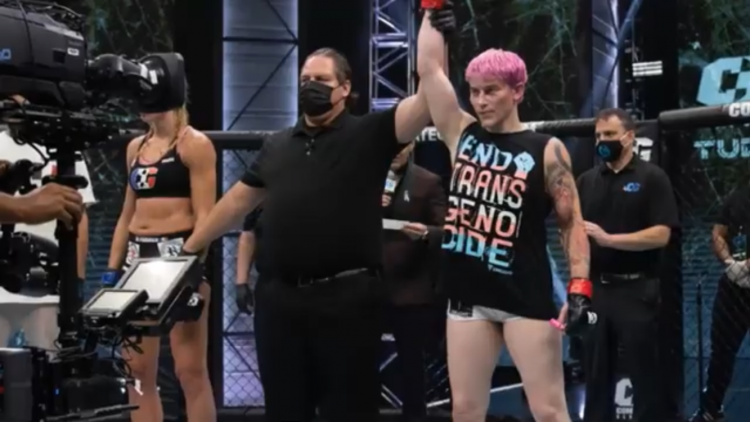 Transgender athlete Alana McLaughlin was declared the victor by submission in her first MMA fight Friday against opponent Celine Provost.

“I want to pick up the mantle that Fallon put down,” said McLaughlin, referring to Fallon Fox, the first transgender woman to fight MMA.

McLaughlin is the second transgender athlete to compete in the MMA, and there have been no others since Fox’s retirement in 2014. “Right now, I’m following in Fallon’s footsteps. I’m just another step along the way, and it’s my great hope that there are more to follow behind me,” she said.

Alana began transitioning upon exiting the U.S. Special Forces in 2010 after serving six years, including a tour to Afghanistan. After training for the past year, Florida State Boxing Commission cleared her to fight after undergoing hormone testing and evaluation.

“I’m 38, so if I’m going to do anything serious competitive athletically, like now is the time,” she said. “Every fighter’s got an expiration date, and I want to do it while I still can.”

McLaughlin’s opponent, Celine Provost, 35, is an MMA veteran. “I have nothing but respect for [Provost],” McLaughlin said, adding that it had been extremely difficult for her to find an opponent. Provost and McLaughlin were originally scheduled to fight on August 6 but had to postpone after Provost contracted COVID-19.

After her victory, McLaughlin sported an “end trans genocide” shirt.