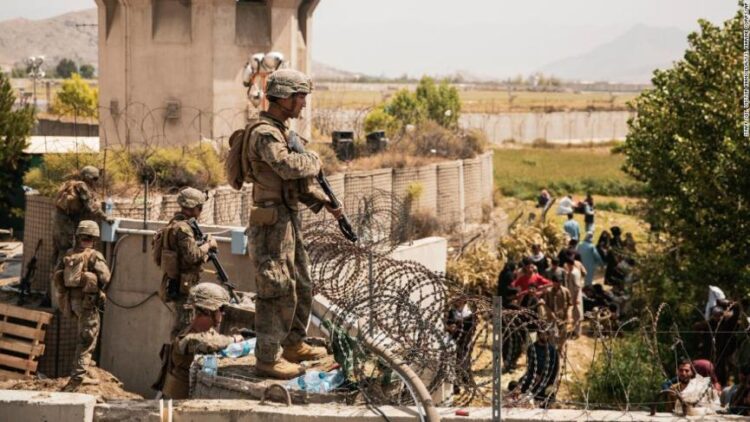 The Taliban is preventing American citizens and Afghan allies from leaving the Mazar-i-Sharif airport in Afghanistan, according to the top Republican on the House Foreign Affairs Committee.

“[The Taliban] are not clearing the airplanes to depart. They’ve sat at the airport for the last couple of days,” Rep. Michael McCaul (R-TX) said on Sunday. “We know the reason why is because the Taliban want something in exchange. This is really turning into a hostage situation where they’re not going to allow American citizens [to] leave until they get full recognition from the United States of America.”

McCaul also alleged that the number of Americans left behind in Afghanistan is “in the hundreds” and says he received information “in the classified space.”

“We have six airplanes at Mazar Sharif airport, six airplanes with American citizens on them as I speak, also with these interpreters, and the Taliban is holding them hostage for demands right now,” McCaul added.

He also revealed that “zero” Americans have been able to leave the country since the United States military forces left on August 30.

“There are planes awaiting takeoff in Mazar-i-Shariff that are not being allowed to take off by the Taliban,” Shedd said. “There were initially issues with the manifests not matching the actual humans on the plane, but that was cleared up days ago…it is the Taliban that is refusing to allow them to leave the country.”

The US State Department then admitted that it doesn’t have any information on the so-called hostage situation and said that the U.S. does not have resources in Afghanistan at this time.

“We understand the concern that many people are feeling as they try to facilitate further charter and other passage out of Afghanistan. However, we do not have personnel on the ground, we do not have air assets in the country, we do not control the airspace — whether over Afghanistan or elsewhere in the region,” a State Department spokesperson told CNN.

“Given these constraints, we also do not have a reliable means to confirm the basic details of charter flights, including who may be organizing them, the number of US citizens and other priority groups on-board, the accuracy of the rest of the manifest, and where they plan to land, among other issues,” the spokesperson added.

McCaul’s allegations caused an outpouring of criticism for President Joe Biden’s handling of the botched U.S. military withdrawal, as well as his general handling of the Taliban resurgence.

“Americans have been held hostage for days in Afghanistan by the Taliban, but Joe Biden and Kamala haven’t made any moves to stop the Taliban. Weakness. If this happened under Trump, there’d be fire and fury, the likes of which would’ve ensured it never happened to begin with,” Robby Starbuck wrote on Twitter.

“Wow! But I thought the Taliban were our “Afghan partners”? Anyone with common sense could’ve seen this coming…” former White House Press Secretary Kayleigh McEnany wrote in a tweet.

“Joe Biden abandoned Americans in Afghanistan. Members of Congress, including me and my office, have been working around the clock to get them out – and for days, Biden’s State Dept/ couldn’t even get out of its own way. Now there are deeply disturbing reports of a hostage crisis,” Sen. Ted Cruz (R-TX) wrote on Twitter.

Congressman Michael McCaul’s office did not respond to the Independent Chronicle’s request for comment.