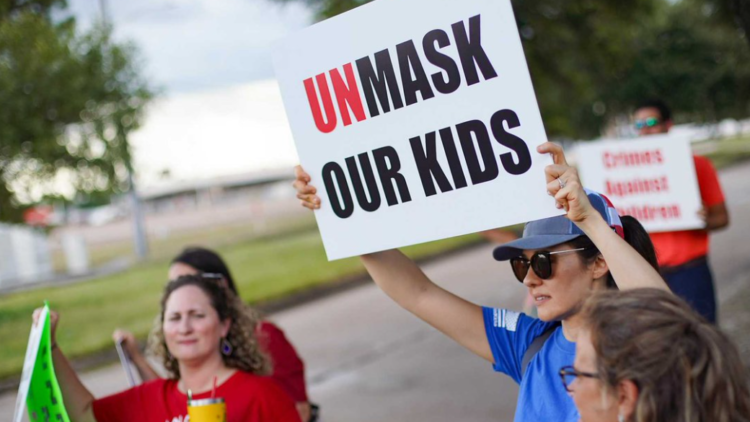 “The ban doesn’t prohibit using masks. Anyone who wants to wear a mask can do so, including in schools,” Governor Abbott tweeted.

Texas Attorney General Ken Paxton petitioned the court citing the Texas Disaster Act of 1975, which allows the governor to assume powers as the “commander in chief” of the state’s response to a disaster.

“Let this ruling serve as a reminder to all [independent school districts] and Local officials that the Governor’s order stands,” Paxton tweeted after the ruling.

Paxton has blamed the uptick in COVID cases in the state on the surge in illegal border crossings since President Biden took office.

“There’s no doubt our [COVID-19] numbers are going up because of the border and what’s going on down there,” he said. “I talked to Dallas police officers who told me that they’ve seen buses come in at night and be completely emptied and the people just disappear,” Paxton said.

The city of San Antonio said they will continue to fight the governor’s ban on mask mandates, saying the court’s decision “has little effect” since a lower court granting the city temporary permission to issue a mask mandate expired Monday.

“The City of San Antonio and Bexar County’s response to the Texas Supreme Court continues to emphasize that the Governor cannot use his emergency powers to suspend laws that provide local entities the needed flexibility to act in an emergency,” said City Attorney Andy Segovia.

Michael Hinojosa, superintendent of the Dallas Independent School District, said Sunday that his district will plan to require masks when the school year begins this week for a majority of students. Dallas County has a hearing on August 24 before a lower court that previously granted it permission to implement a mask mandate.

“Tex Supreme Court narrowly ruled, staying only the TRO against Gov. Abbott but allowing the temporary injunction hearing to go forward. We won’t stop working with parents, doctors, schools, business + others to protect you and intend to win that hearing,” said Clay Jenkins a Dallas County judge.