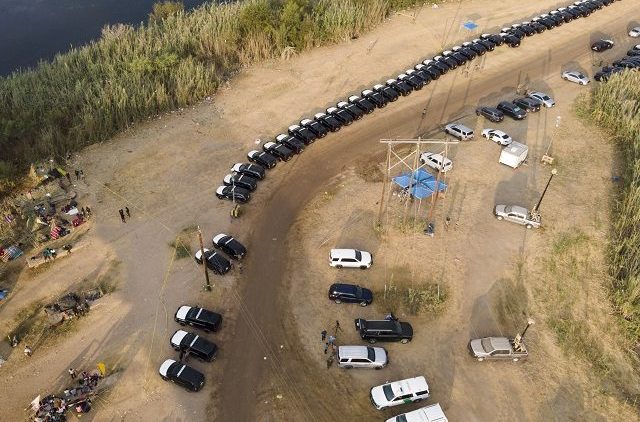 Texas Gov. Greg Abbott ordered the Department of Public Safety and National Guard to use vehicles to create a barrier to stop the flow of illegal immigrants crossing the Rio Grande.

“The State of Texas is taking unprecedented steps to secure the border, and we will continue to respond in full force to keep Texans safe,” Abbott said during a press conference on Tuesday.

RELATED: VP Harris comments on border crisis for the first time in a month by slamming border patrol agents: ‘Horrible’

“The Biden Administration’s failure to enforce immigration laws and halt illegal crossings on a federal dam poses life-threatening risks to Texans and the migrants themselves,” he added.

Abbott ordered DPS and the Texas National Guard on Sept. 19 to use vehicle barriers as a form of blocking the crossing of migrants from Ciudad Acuna, Coahuila, to Del Rio, Texas. The move comes as thousands of Haitians have flooded the Del Rio sector of the border to try to gain asylum in the United States.

The Governor also ordered the building of physical barriers and fencing along the river to prevent the migrants from having unrestricted access to the border.

Thousands of Haitians have created a makeshift encampment under the Del Rio bridge in Texas. Department of Homeland Security Secretary Alejandro Mayorkas held a press conference there on Monday. Mayorkas vowed to remove the migrants and deport them back to Haiti.

“If you come to the United States illegally, you will be returned, your journey will not succeed, and you will be endangering your life and your family’s life,” he said.

Despite the administration claiming to be sending the migrants back to Haiti, reports of large-scale releases of migrants into the U.S. have surfaced in recent days.

One official with direct knowledge of the operations, who requested to remain anonymous, said releases into the United States are happening on a “very, very large scale.” The official put the figure in the thousands.