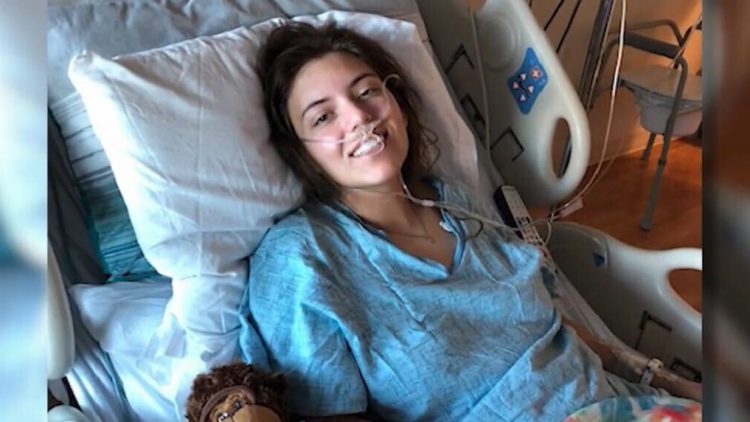 17-year-old Shelby Grace Allen of Dyer County, Tennessee was hospitalized for a rare but serious reaction to the COVID-19 vaccine that left her with temporary paralysis of her limbs.

“I definitely feel blessed. I could be in a lot worse situation than I am now. I could be dead, or I could be paralyzed,” she told WKRN.

“Gracie,” as she’s called, started to experience odd symptoms several weeks ago. While acting as Maid of Honor in a wedding, her toes began tingling and her back started hurting.

Her symptoms worsened until one day when she was practicing with her bowling team, she started to panic when she lost feeling in her arms and legs.

“I’m on the bowling team in Dyer County and I noticed when I was throwing the ball, I couldn’t feel my arm and legs. So, I was freaking out,” she said.

Gracies was admitted to the intensive care unit at Le Bonheur in Memphis, where she is being treated for a condition called Guillain-Barré Syndrome.

“When we got in, my doctor, my P.A. told me right off the bat what she thought it was. She said you have Guillain-Barré,” she said.

“Guillain-Barré (Ghee-YAN Bah-RAY) syndrome (GBS) is a rare, autoimmune disorder in which a person’s own immune system damages the nerves, causing muscle weakness and sometimes paralysis. GBS can cause symptoms that last for a few weeks to several years. Most people recover fully, but some have permanent nerve damage,” according to the CDC. Although rare, people also die from the disorder. In the United States, an estimated 3,000 to 6,000 people develop GBS every year. GBS is a known, albeit rare, reaction to various vaccines, including the flu shot.

The FDA added an official warning to the Johnson & Johnson vaccine in July, cautioning consumers that the vaccine has been linked to the rare but serious disorder.

Like Gracie, most people experience tingling in the legs as one of the first symptoms.

“The typical progression of GBS is from the legs up to the arms over a one-week to four-week period,” says neurologist Dr. Kerry Levin. “That can be accompanied by progressive heaviness and weakness in the legs the arms — and later on, there can be difficulty with swallowing and breathing, but those are unlikely to be initial presentations.”

“The illness is going to cause more symptoms and is more likely to cause that issue than the vaccine itself. I would still urge people to still get the vaccine,” he said.

“I think everybody needs to get it, if they want to. they shouldn’t be afraid of it but know what could happen if you do get it,” Gracie agreed.