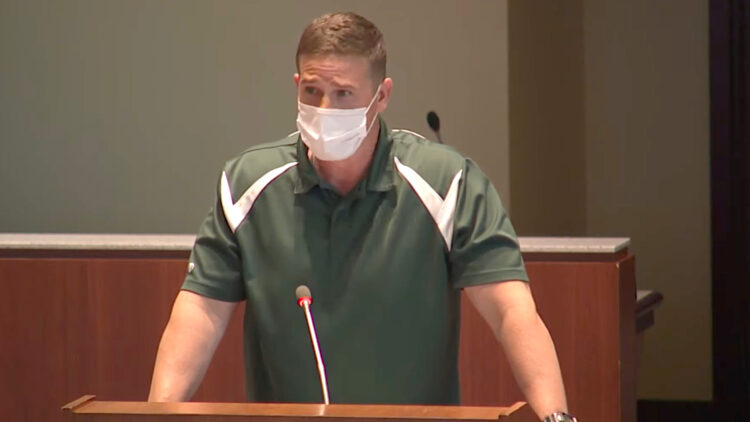 An elementary school gym teacher who was placed on administrative leave last month after saying he would not be affirming transgender students’ identities with their preferred pronouns has been reinstated by the order of a judge.

Twelfth Circuit Judge James E. Plowman ordered Loudoun County Public Schools to restore Cross’ position as a physical education teacher at Leesburg Elementary School. The judge’s temporary injunction will allow him to maintain his job until the end of the year.

Byron “Tanner” Cross, taught physical education at Leesburg Elementary School until he told the school board that he would not affirm “a biological boy can be a girl and vice versa” because doing so would go against his faith and “defiles the holy image of God.”

“My name is Tanner Cross and I am speaking out of love for those who are suffering from gender dysphoria,” Cross said while addressing the school board during a public meeting. Cross was referring to school district policies demanding Loudoun County Public Schools (LCPS) staff and teachers use students’ preferred pronouns and “allow gender-expansive and transgender students to participate in such activities in a manner consistent with the student’s gender identity.”

Cross referenced a “60 Minutes” episode that aired last month investigating transgender youth who de-transitioned shortly after their respective surgeries. The episode featured 30 young people who transitioned but felt that the medical system didn’t have their best interests at heart. They spoke about the lack of pushback from medical professionals and others who led them astray and made it too easy for them to go through the process of forever changing their bodies.

“It’s not my intention to hurt anyone, but there are certain truths that we must face when ready. We condemn school policies [that] would damage children, defile the holy image of God,” he added.

“I love all of my students but I will never lie to them regardless of the consequences. I’m a teacher but I serve God first and I will not affirm that a biological boy can be a girl and vice versa because it’s against my religion, it’s lying to a child, it’s abuse to a child, and it’s sinning against our God,” Cross concluded.

Just days after giving that speech, Cross says he was told in a letter from the school district not to come back to the school’s premises. The letter stated that the district was investigating “allegations that you engaged in conduct that has had a disruptive impact on the operations” of the school.

Judge Plowman’s letter rejected the school district’s argument that Cross was suspended for the disruption caused by his speech and not the speech itself.

“[T]he Court has found … that the disruption relied upon was insufficient,” he wrote, adding that Cross’ speech and religious content were “central” to LCPS’ decision.

Cross’ “interest in expressing his First Amendment speech outweigh the Defendant’s interest in restricting the same and the level of disruption that Defendant asserts did not serve to meaningfully disrupt the operations or services of Leesburg Elementary School,” he added.

“Nobody should be punished for expressing concern about a proposed government policy, especially when the government invites comment on that policy,” said Michael Farris, President and CEO of the Alliance Defending Freedom, which represented Cross.

“For that reason, we are pleased at the court’s decision to halt Loudoun County Public Schools’ retaliation against Tanner Cross while his lawsuit continues. Educators are just like everybody else — they have ideas and opinions that they should be free to express. Advocating for solutions they believe in should not cost them their jobs.”