Teacher forced out after ‘bullying’ students with left-wing political rant, caught on video 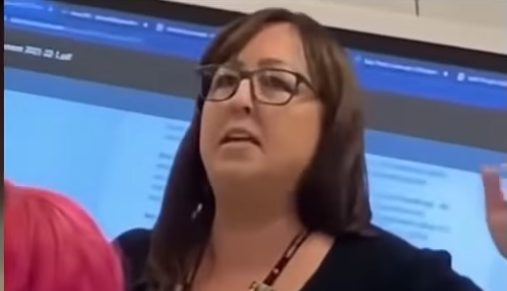 A teacher with the Alpine School District in Lehi, Utah, was forced out after a video showed her “bullying” students with a politically charged tirade in class.

“This is my classroom, and if you guys are going to put me at risk, you’re going to hear about it. Because I have to be here, I don’t have to be happy about the fact that there’s kids coming in here with their variants that could possibly get me or my family sick, that’s rude,” she yells at the students regarding the risk of COVID-19.

The teacher then tells students who don’t believe in climate change to “get the hell out.” “If you’re a homophobe, get out!”

Judy Storms’s son, a sophomore, was in one of the classes and captured some of the teacher’s comments in a video.

“I’m deeply disturbed,” parent Judy Storms said. “We’re finding out this a pattern by the teacher, and if this is a pattern and people have complained over the years, why has something not been done?”

“An adult bullying a minor, that’s illegal, and because she took it that far, I really think she should be dismissed,” Storms said.

“She blew up at us, calling us ignorant for deciding not to get the vaccine,” said Breckynn Wilson, one of the students in the classroom. “I honestly just wanted it to stop. So in the video that was posted, you can hear me in the background saying that ‘This is a chemistry class, and why are we talking about this?’ over and over again because it was pointless.”

Video of the encounter was posted online by Eric Moustos, a former Salt Lake City police officer who resigned in 2014 after refusing to ride a motorcycle through that city’s gay pride parade, according to local media reports.