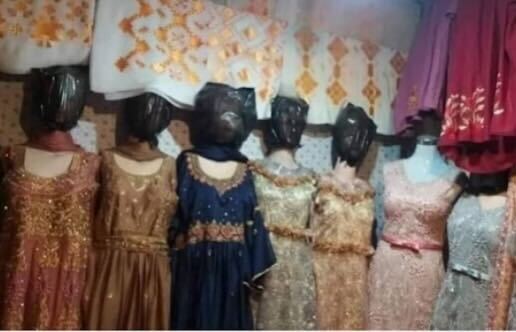 The Taliban has ordered shop owners to behead their display mannequins as they’ve ruled that the use of mannequins constitutes idolatry which is a violation of Muslim religious beliefs.

“All the statues and mannequins in your stores must be headless,” reads a memo from the Taliban’s Ministry for the Propagation of Virtue and the Prevention of Vice in the province of Herat.

The state-controlled ministry is responsible for interpretation of Islamic law and oversight and enforcement in the Afghani province. The Ministry decided that mannequins are “idols” and stand in the way of the worship of Allah.

Reportedly, the Ministry’s original intent was to ban mannequins altogether but ceded on the grounds that shopkeepers would suffer too big a financial loss, although many local businessmen say the beheading of their mannequins will still be a financial hit.

“Each mannequin costs $100, or $80 or $70, and beheading them will be a huge financial loss,” said local shopkeeper Abdul Wadood Faiz Zada.

“The Taliban have not changed,” Mohammad Yusuf stated.

“There will be restrictions once again. They have not gained international recognition, but should they obtain it, they would bring back even stricter limitations,” he warned.

This comes as reports of abuse and human rights violations, particularly against women and children, continue to increase in Afghanistan. Reports continue to confirm that the Taliban is picking up where it left off in the 90’s and has not changed at all.

Women are persecuted, punished, and murdered for crimes of improper clothing that shows too much skin, being victims of rape, and adultery.

Babies less than a month old are being “betrothed” in exchange for a dowry. UNICEF said “credible reports” confirm the horrifying practice, and they estimate that 28% of Afghan women between the ages of 15 and 49 are married off before they reach 18.

Rules enforced by the Taliban also ban teenage girls from going to school and getting an education.

One terrifying report detailed how a woman was set on fire for bad cooking. She was “put on fire because she was accused of bad cooking for Taliban fighters,” said Najla Ayoubi, a former Afghan judge who now heads Every Woman Treaty, which campaigns to end violence against women.

“Also there are so many young women are being in the past few weeks being shipped into neighbouring countries in coffins to be used as sex slaves,” Ayoubi added.

“I don’t see where is the promise that they think women should be going to work, when we are seeing all of these atrocities.”