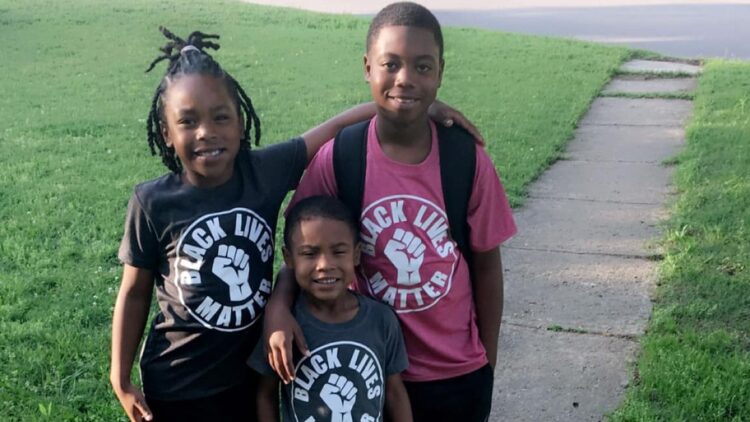 An Oklahoma school district is sticking by its ban on “political messaging” on children’s clothes after two boys were disciplined for wearing Black Lives Matter t-shirts to school.

Brothers Bentlee Herbert, 8, and Rodney Herbert, 5, arrived at Charles Evans Elementary School wearing Black Lives Matter t-shirts on April 30. Both boys were removed from their classrooms and told to turn their shirts inside out in order to finish the school day. Refusing to do that, the boys were sent to the office, where they were told to stay for the remainder of the day.

Jordan Herbert, the boys’ mother, said she found out about the incident on March 3. She contacted the school to ask how the boys’ shirts broke the dress code. Herbert was put in contact with the superintendent Kim Holland. “He told me when the George Floyd case blew up that politics will not be allowed at school,” Herbert said. “I told him, once again, a ‘Black Lives Matter’ T-shirt is not politics.”

“I got in touch with him, met with him, we had a 40-minute conversation. I asked him to show me in the policy dress code where it said he couldn’t wear it, he said it wasn’t in there,” Herbert added.

Principals make final decisions regarding dress code, according to Charles Evans Elementary School handbook for 2020-2021. The 9-point section on dress code only mentions that shirts and tops with “saying or logos” should be “school appropriate” and “in good taste.”

Holland said that the shirts are disruptive in a “charged” social climate.

“It’s our interpretation of not creating a disturbance in school. I don’t want my kids wearing MAGA hats or Trump shirts to school either because it just creates, in this emotionally charged environment, anxiety and issues that I don’t want our kids to deal with,” Holland said. “Most of it has not been an issue until this lady here has been angry about it and I wish she weren’t so upset,” he added.

The Monday meeting with Holland ended with the understanding that her children would not actually be punished if they returned in Black Lives Matter shirts, according to Herbert. She also claimed to have taped the entire conversation but refused to provide a copy to the media.

“I asked him what would be done if I sent him to school in a Black Lives Matter shirt, and he told me that there was nothing that could be done if they respectfully refuse to wear their shirt inside out,” she said.

In protest of the policy, Herbert’s three boys, including Jaelon, 12, all went to school on Tuesday wearing Black Lives Matter shirts. Rodney had to sit in the principal’s office at Will Rogers Elementary School, and Bentlee was forced to do his school work in the front office at his school, Herbert said.

Bentlee was also forced to miss recess and had to face a wall for six hours in the school office, according to his mother. He was not allowed to eat lunch with his friends in the cafeteria, she said.

“They say no disciplinary action was taken, but making them sit in the office missing everything was modern-day segregation,” Herbert told local media.

Holland said the three boys were not in any trouble and described them all as “wonderful.” He said the issue may cause the board of education to review the dress code further.

Herbert and a small group of supporters met in the parking lot of her son’s elementary school with at least six supporters, on Wednesday. Only two other supporters had come and gone during the gathering, which lasted about 45 minutes.

Herbert claims she has no plans of pursuing legal action against the school or the faculty, but wants school officials to understand why her children would wear Black Lives Matter apparel.