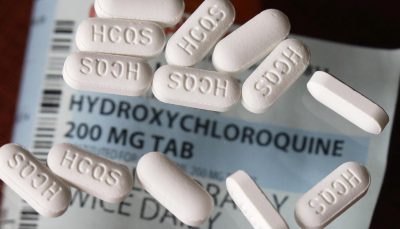 A new study shows that hydroxychloroquine, the controversial drug touted by former President Donald Trump increased the likely survival rate of those severely ill with COVID-19.

“We found that when the cumulative doses of two drugs, HCQ and AZM, were above a certain level, patients had a survival rate 2.9 times the other patients,” the study says.

The observational study was conducted by Saint Barnabas Medical Center in New Jersey on 255 patients and published by medRxiv. It found that hydroxychloroquine, normally used as an antimalarial drug, along with zinc, could increase the coronavirus survival rate by as much as nearly 200% if distributed at higher doses to patients on ventilators due to severe symptoms of COVID-19.

“By using causal analysis and considering of weight-adjusted cumulative dose, we prove the combined therapy, >3 g HCQ and > 1g AZM greatly increases survival in Covid patients on IMV and that HCQ cumulative dose > 80 mg/kg works substantially better. These data do not yet apply to hospitalized patients not on IMV. Since those with higher doses of HCQ had higher doses of AZM, we cannot solely attribute the causal effect to HCQ/AZM combination therapy. However, it is likely AZM does contribute significantly to this increase in survival rate. Since higher dose HCQ/AZM therapy improves survival by nearly 200% in this population, the safety data are moot,” the study says.

The study gives credence to former President Donald Trump’s assertions last spring that HCQ was safe and effective. Trump received major pushback from Democrats, members of the media and even his own coronavirus team member, Dr. Anthony Fauci. Trump also took the controversial drug himself, touting it as the reason for his quick recovery from the virus.

“We know that every single good study – and by good study I mean randomised control study in which the data are firm and believable – has shown that hydroxychloroquine is not effective in the treatment of Covid-19,” Fauci said last year.

Social media sites actively censored people who touted HCQ on their platforms, including Twitter which temporarily suspended the account of former President Trump’s son Donald Trump Jr. Trump Jr. shared a video touting the effectiveness of the drug which led Twitter to announce that he had broken the platform’s policy on “spreading misleading and potentially harmful misinformation” related to the coronavirus.

Supporters of the former president have expressed their disapproval with Dr. Fauci amid the new study which appears to prove his previous comments against using HCQ were not true.

“How many people died because the corporate press lied about hydroxycloroquine? Physical deaths directly caused by the political agendas of journalists,” wrote one twitter user.

“Not that I care a great deal for me (I’ve had it and have been vaxxed), but it’s curious why the media has continuously downplayed the therapies for COVID, like Hydroxycloroquine and Ivermectin. Just gotta wonder. Sure seems like both have had a great deal of success,” wrote another.