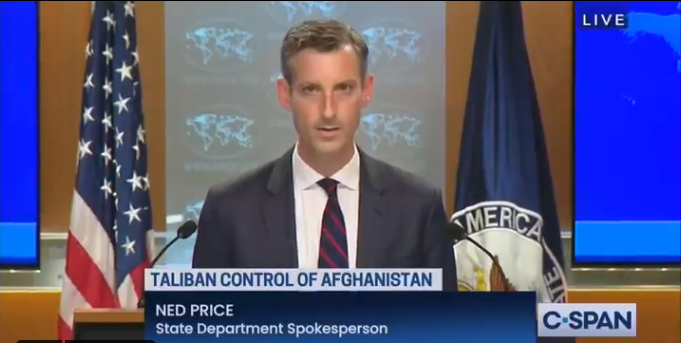 The U.S. State Department is receiving criticism for asking the Taliban to respect human rights as the Biden administration faces mass criticism for how the U.S. is withdrawing from Afghanistan.

Ned Price, a spokesman for the State Department, expressed solidarity with the UN Security Council, and called for an Afghan government that is “united, inclusive, and representative.”

Twitter users were quick to point out the futility of his statement as the Taliban is already violating human rights, targeting young girls, women, and journalists in Afghanistan imposing Sharia Law.

“lol, I’m sure inclusivity is a top priority for Taliban! Right after gender pronouns,” one person tweeted.

“Dammit! I wish they would have called for an inclusive government in Nazi Germany! Definitely would have changed the course of history!” said another.

“Oh, well if they’re CALLING for it, there’s no more to see here, folks. We can all go back to The Bachelor now,” reassured someone else.

“Don’t wait up for the Taliban to offer maternity flight suits or gender reassignment surgery free for their military…,” Tim Young tweeted.

“Well if you “call for it”, there’s no doubt the Taliban will take it under advisement,” another agreed. “Time for a harshly worded letter,” advised someone else.

“You can’t make this stuff up. What’s more amazing is he says this with a straight serious face. We’re in trouble,” tweeted one user.

“It seems inclusive to the Taliban means Al-Qaeda. Based on a female journalist interview with Taliban commander, they ain’t woke,” one person stated.

“Did they also ask the Taliban to be more “inclusive” by adding members who aren’t terrorists?” wondered Thaddeus McCotter.

Some users specifically targeted the spokesperson and questioned his ability to fulfill his position.

“He’s never heard of the Taliban before today, has he?” one user said.

“Sure, right after the rapings and beheadings, pencil neck #AskNicely,” responded Dana Loesch.

A few people pointed out the humor in the State Department’s request, given the Taliban’s record on human rights.

“Lol, they want to turn the Taliban woke now.

“This would be laughable if it wasn’t so sad,” remarked someone else.