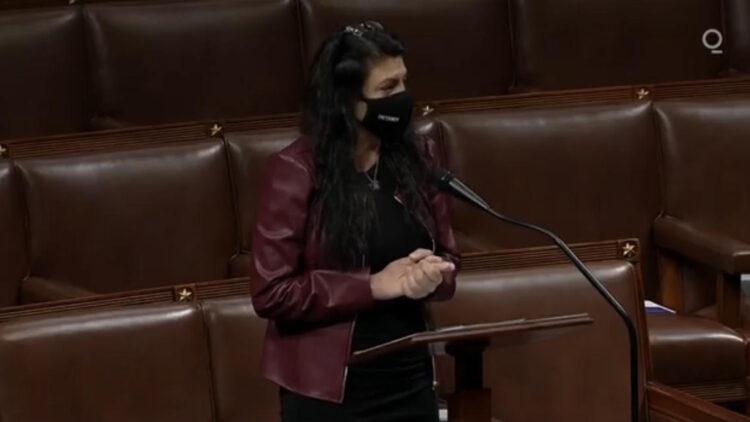 Rep. Rashida Tlaib (D-Mich.) once again called on Congress to defund every federal enforcement agency charged with protecting U.S. borders, as her fellow Squad members continue to double down on their desire to defund the police.

“We must eliminate funding for CBP [Customs and Border Protection], ICE [Immigration and Customs Enforcement] and their parent organization DHS [Department of Homeland Security],” Tlaib demanded of Congress on Wednesday.

Tlaib, a known member of “the Squad,” was asked about the push by the Biden Administration to increase spending on the border due to the ongoing crisis. She insisted during a virtual interview with Just Futures Law, an immigrant rights group, that advocates and human service agents must see that the border agencies are “inept.” The Department of Homeland Security (DHS) recently requested over $700 million in federal funds to invest in detection capabilities and modernizing land ports of entry, something Tlaib believes would be unhelpful.

“This approach is something that many, especially the new members of Congress, are coming with full force and pushing back against this idea,” Tlaib said. “They rename this kind of militarization or targeting in a very inhumane way of our immigrant neighbors, but when it comes down to it it is the same thing – which is targeting communities of color in a way that to me very much violates human rights and dignity for so many of our communities.”

The Squad, which also includes Ayanna Pressley (D-Mass.), Alexandria Ocasio-Cortez (D-NY), and Ilhan Omar (D-Minn.), introduced the BREATHE Act in 2020, which would have stripped ICE and the Drug Enforcement Agency (DEA) from receiving federal funding, effectively abolishing the two agencies. Back in 2019, Ocasio-Cortez (D-NY) vowed to defund ICE herself, saying that all Latinos must be exempt from immigration laws because they are ‘native’ to U.S. lands and descendants of native people. Ilhan Omar (D-Minn.) then called for abolishing ICE as well, and called the agency ‘un-American’, on Twitter. All members of the Squad have also called for defunding police departments across the nation.

“I will never cosign on funding a police department that continues to brutalize us…we need to completely dismantle the Minneapolis Police Department because here’s the thing, there’s a cancer,” Tlaib said at a “Defund the Police Rally” in June, 2020. “We’re going to do everything that we can to cut the source of that cancer…we don’t want your damn reforms, we don’t want the slow dying of our communities to continue. The Minneapolis Police Department is rotten to the root, and so when we dismantle it, we get rid of that cancer.”

Key members of the Biden Administration, including Press Secretary Jen Psaki and senior advisor Cedric L. Richmond have recently claimed that it is Republicans, not Democrats, who want to defund the police.