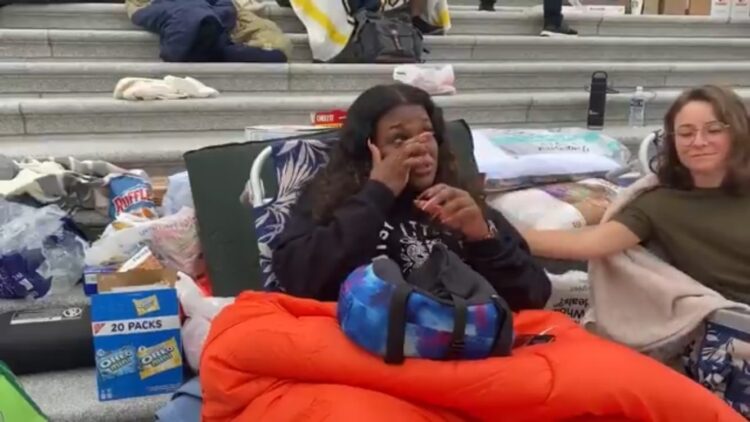 Twitter users slammed Rep. Cori Bush (D-MO) for a video on the steps of the Capitol building where she is crying after camping out overnight in protest of the end of the eviction moratorium.

“One of the most shameless and embarrassing stunts we’ve ever seen from a politician, and that is saying something,” Matt Walsh tweeted.

The video shows Bush reclining in a lawn chair and surrounded by chips, Oreos, and other picnic snacks. Appearing to be overcome with emotion, she holds her head and wipes at her eyes for nearly 15 seconds before speaking at the beginning of the video. “It’s just…triggering,” she explains to the reporter.

Bush went on to say that the problem is structural and systemic and that politicians need to step up and make better policy decisions.

“This is hilariously bad acting on @CoriBush’s part. Yikes. My God, how do people fall for this crap?” another person Tweeted. “FYI nobody has a right to stay at someone else’s property for free.”

“Our elected leaders are reality TV stars with the intelligence of a doorknob,” said senior policy analyst Erielle Davidson.

Others commented on the junk food and goodies lying around.

“I don’t know that I’ve ever felt less respect for a politician than when I noticed @CoriBush left a bag of Ruffles open to the flies and humidity. What kind of barbarian does things like that?” quipped Jesse Kelly.

“Showing up with Oreos, Chips, and manicured fingers is really living in the trenches.

In June, the Supreme Court ruled 4-5 to allow the CDC’s eviction moratorium until July 31, and after that, its fate would be up to Congress.

“In light of the Supreme Court’s ruling, the President calls on Congress to extend the eviction moratorium to protect such vulnerable renters and their families without delay,” Jen Psaki said in a press conference.