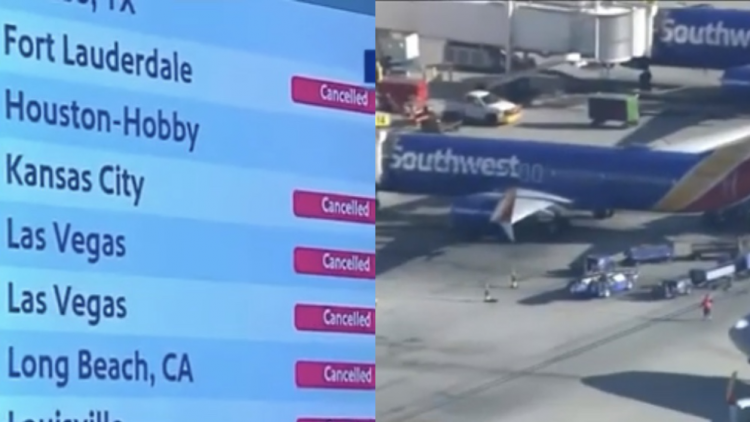 Southwest Airlines’ cancelation of 1,900 flights this weekend left many wondering if the issues are connected to the company’s new vaccine mandate for workers.

The FAA said that other than a “few hours” of flight delays on Friday afternoon due to weather and staffing issues concentrated at Jacksonville Air Route Traffic Control Center that “No FAA air traffic staffing shortages have been reported since Friday.”

“Some airlines continue to experience scheduling challenges due to aircraft and crews being out of place. Please contact the airlines for details about current flight schedules,” the statement continued.

Southwest announced their vaccine mandate for workers last week, in accordance with the directives set forth by the Biden administration. Although employees are allowed to seek medical and religious exemptions, the company said all workers must be fully vaccinated by December 8.

In addition to commercial travel, the airline is under contract to carry mail and in certain cases to provide emergency flights for military purposes. Companies with federal contracts like these are subject to the Biden administration requirement that their employees be vaccinated.

The pilots’ union argued in court on Friday that the mandate “unlawfully imposes new conditions of employment and the new policy threatens termination of any pilot not fully vaccinated by December 8, 2021,” according to Bloomberg.

“Southwest Airlines crews are walking out and so are FAA air traffic controllers. This is just the beginning,” tweeted Buzz Patterson.

“I stand with #Southwest Airlines employees who are fighting against these mandates. This isn’t about a vaccine, this is about freedom,” tweeted Representative Andy Biggs.

The Southwest Airlines Pilots Association commented over the weekend that it realizes the “operational difficulties” affecting the airline, but “can say with confidence that our Pilots are not participating in any official or unofficial job actions.”

Southwest Airlines did not immediately respond to Independent Chronicle’s request for comment.