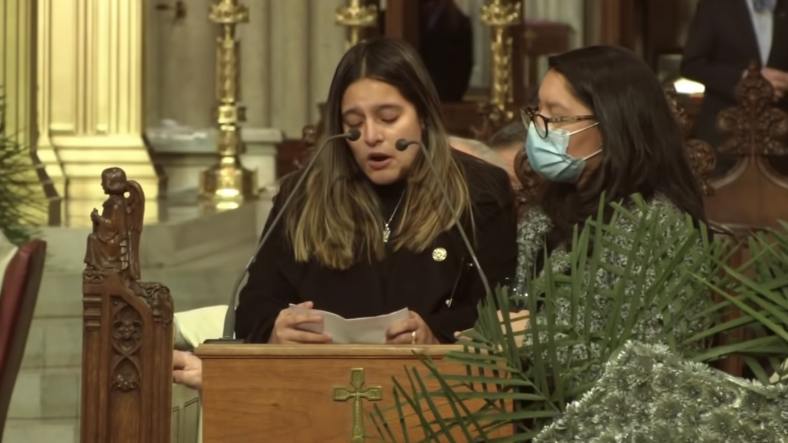 “The system continues to fail us. We are not safe anymore, not even the members of the service,” Dominique Luzuriaga proclaimed in her late husband’s name.

The young widow took the opportunity to speak out against woke criminal justice policies, even singling out some by name as she had the country’s ear from the podium at St. Patrick’s cathedral in New York.

“I know you [Rivera] were tired of these laws, especially the ones from the new DA. I hope he’s watching you speak through me right now,” Dominique said, referring to Democrat DA Alvin Bragg, who is known for his soft stance on criminal justice.

The crowd of mourners and law enforcement officers showed their support for her statement with a standing ovation.

“I’m sure all of our blue family is tired too. But I promise – we promise – that your death won’t be in vain,” Dominique continued, her voice shaking with grief.

Bragg was reportedly present at Rivera’s funeral for Dominique’s eulogy. He was also seen at the officer’s wake and shunned by Rivera’s family who refused to see or converse with him.

Bragg then issued a statement saying that he was grieving and praying for the slain officers.

“I am grieving and praying for Detective Rivera and Officer Mora today and every day, and my thoughts are with their families and the NYPD,” Bragg tweeted. “Violence against police officers will never be tolerated, and my office will vigorously prosecute cases of violence against the police.”

Officers Jason Rivera and Wilbert Mora were responding to a domestic violence call in Harlem when they were ambushed by career criminal Lashawn McNeil. McNeil, 47, shot both Rivera and Mora. Another officer returned fire and mortally wounded McNeil. Rivera died at the scene. Mora died in the hospital on Tuesday. Mora’s funeral, also at St. Patrick’s, will be held Wednesday.

Rivera, 22, had been with the NYPD for less than two years, and married to his childhood sweetheart Dominique for less than a year.

Rivera and Mora are the first officers to be shot in the line of duty by a gunman in NYC since 2017, but there have been 73 shooting incidents so far this year in the city, which is an increase of 23.7% compared to last year. A total of 82 people have been shot as of January 23, up from 67 in the first three weeks of 2021.