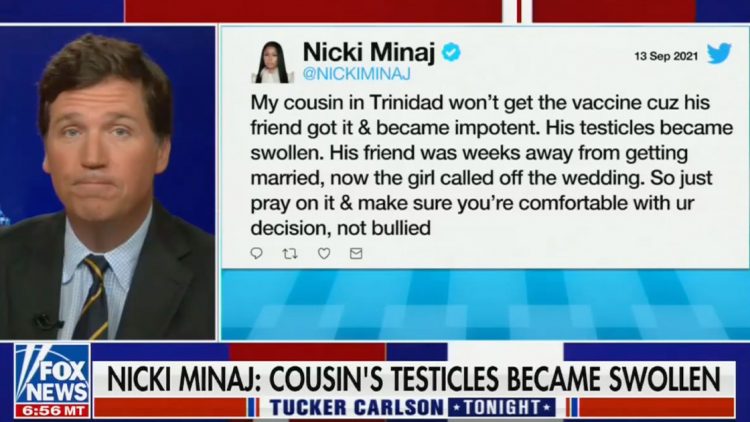 Singer Nicki Minaj was inundated with replies after tweeting a video of Fox News host Tucker Carlson defending her right to not get the COVID-19 vaccine amid claims that someone she knows suffered negative side effects.

Minaj tweeted the video along with a bullseye emoji indicating her support for what Carlson had to say.

“But it’s not anything to do with the physical effect of the vaccine that makes our political class mad it’s the last part of Nicki Minaj’s tweet that enrages them. The part where she says you should pray on it, make the decision yourself like a free human being and quote don’t be bullied,” Carlson said in response to Minaj’s hesitancy to get the vaccination.

“So our media and public health officials didn’t like this because they make their living bullying people. So they couldn’t let it stand,” Carlson adds.

“My cousin in Trinidad won’t get the vaccine cuz his friend got it & became impotent. His testicles became swollen. His friend was weeks away from getting married, now the girl called off the wedding. So just pray on it & make sure you’re comfortable with ur decision, not bullied,” Minaj tweeted Sept. 13.

Minaj’s tweet got the attention of producers at FOX, who invited Minaj to be a guest on Carlson’s show.

“I’m with Tucker Carlson. Join Tucker on his show. You won’t be silenced or laughed at here- it’s a Free Speech Zone. DM me. We will make it happen,” replied Justin Wells, Senior executive producer of Carlson’s show on Fox News.

Minaj received a flurry of responses to the Carlson video, with many on the left claiming the Fox News host is a racist.

“Right. I can’t speak to, agree with, even look at someone from a particular political party. Ppl aren’t human any more. If you’re black & a Democrat tells u to shove marbles up ur ass, you simply have to. If another party tells u to look out for that bus, stand there & get hit,” she said.

“Imagine being this dumb ^” Raheem Kassam also said in return.

Some fans asked her to focus on her music and film career rather than politics.

“Nicki plzzz we dont care we not politicians plzzz release some music or do a film,” one fan replied.

“I care cause I’m not vaccinated and I’m tired of people bullying us tf,” another fan said in return.

Other users claimed Carlson is a “domestic terrorist.”

“Why are you sharing something from a domestic terrorist?” someone replied.

“nicki please don’t start promoting tucker carlson just because you agree with him on one thing,” another person said.

“To the younger people in the comment section… it’s ok to agree with the message even though you don’t necessarily like the messenger. That’s adulthood,” said someone else.