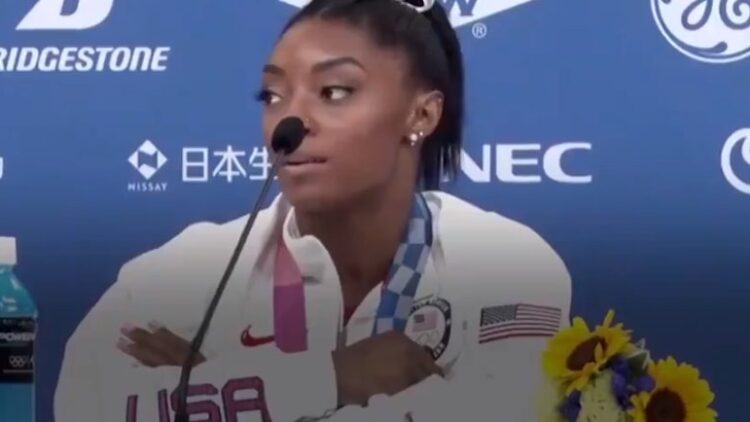 “It’s okay sometimes to even sit out the big competitions to focus on yourself. Because it shows how strong of a competitor and person that you really are, rather than just battle through it,” Biles said during a press conference Tuesday.

“I think we’re just a little bit too stressed out. We should be out here having fun, and sometimes that’s not the case,” she added. “I just felt like it would be a little bit better to take a back seat to work on my mindfulness.”

Reactions to Bile’s decision flooded social media, with many expressing their disappointment while others showed their support for the 24-year-old gymnast who holds 30 Olympic and World Championship medals.

“We now have decorated Olympic athletes quitting in the middle of the competition because they’re sad. What an absolute embarrassment. But in some ways an appropriate representation of a country that has gone soft,” conservative blogger Matt Walsh tweeted.

I honestly don’t blame her for walking out. They made a mockery of the games and won’t allow her to earn points at her peak performance level because it’s “unfair” and “unsafe” for other athletes,” replied conservative commentator John Cardillo.

Scottie Pippen STILL gets crushed for pulling himself out of a playoff game against the Knicks because a play wasn’t called for him. And the blue check brigade on here wants to tell me Simone Biles is a hero for quitting in the middle of a team event? This is crazy,” tweeted Clay Travis, co-host of the Clay & Buck radio show.

Others commended Biles for putting her own mental health and wellness above all else.

“On Simone Biles: to be able to put one’s own mental health and wellness first takes immense strength and self-awareness. May we all know our own boundaries and protect our peace,” tweeted Lauren Peikoff, executive producer at MSNBC.

“How about the mental health of the gymnast who missed the Olympics by one spot before Simone Biles decided this was the time to take a mental health break?” asked conservative radio host Joel Pollak.

“Between this and Naomi Osaka’s loss to #42 ranked competitor, plus basketball’s loss to France, and it starts to look like the US Olympics team is trying to avoid winning, pursuant to the “take a knee” strategy. We’re not worthy of their wisdom. lol.” Replied another Twitter user.

“Black Women prioritizing their mental health brings me so much joy. The guise of being “strong” is overrated,” said another.