School board member warns graduates of ‘capitalism,’ ‘individualism’ encourages them to ‘remember jihad’ in commencement speech 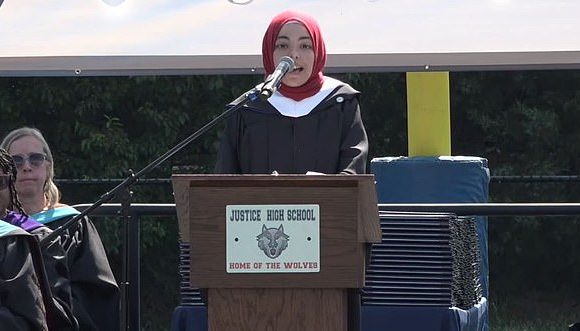 A school board member called on graduating high school students to remember ‘jihad’ at their commencement and warned they were entering a world of “racism, capitalism, and individualism.”

“The world sees the accolade, the diploma, the fruit of all your years yet be reminded of the detail of your struggle,” said Abrar Omeish, a Communist who won a seat on the Fairfax County School Board in 2019. When she said the phrase again but in Arabic, she used the term “Jihad,” which means “struggle” or “holy war” in that language.

“We struggle with human greed, racism, extreme versions of individualism and capitalism, white supremacy growing wealth gaps, disease, climate crisis extreme poverty amidst luxury and waste right next door, and the list goes on,” she warned the students.

“The world may try to quiet you by deciding for you what’s cool, what’s weird, what is or isn’t objective. It may try to convince you that what you hold dear is too different to be accepted. But who gets to decide?” She continued.

Omeish went on to tell the students to “cause good trouble” and that the world will try to intimidate them into thinking that the truth is “controversial.”

“Every part of your being may scream in rage at the ways others have wronged you, but let compassion for your fellow human beings, not anger or rage, and believe me this is hard to do, fuel you,” she went on.

Watch a portion of her speech here, courtesy of Daily Mail:

Omeish told the crowd that her Libya-born father, Esam Omeish, also went to the High School. He was forced to resign from the Virginia Commission on Immigration in 2007 after using the term “jihad” to praise the Palestinians while condemning Israel in 2006.

Abrar Omeish received calls for her to resign from the school board in May after she tweeted criticism of Israel labeling it an “apartheid state.”

“Eid Mubarak! Congrats on 30 days of worship! Hurts my heart to celebrate while Israel kills Palestinians & desecrates the Holy Land right now. Apartheid & colonization were wrong yesterday and will be today, here and there,” she tweeted.

Following that tweet, the Fairfax County Republican Party issues a statement calling for her resignation.

“Reading Omeish’s hateful screeds, I can only conclude that she is deeply anti-Semitic — or at the very least, a visceral hater of Israel and its people,… “Either way, Omeish’s bigotry is just not consistent with her duty to serve the best interests of all students, no matter their background. I call on Fairfax Democrats to join me in condemning Omeish’s venomous words and demanding her resignation as well,” Committee Chairman Steve Knotts said.

In 2019, Police accused Omeish of resisting arrest during a traffic stop after she turned right on a red light. She pleaded no contest to failing to exhibit her driver’s license and to failing to stop before turning right on a red traffic light, according to court records.

A Fairfax County police spokeswoman said Omeish refused to provide her driver’s license and proper identification after the officer requested her to more than a dozen times. The officer was eventually forced to deploy pepper spray on Omeish because she refused to cooperate during the traffic stop.