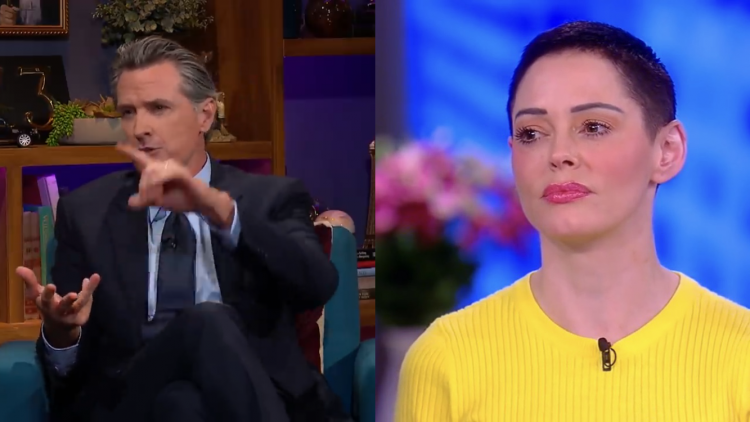 Actress Rose McGowan alleges that Jennifer Newsom, wife of California Governor Gavin Newsom, acted on behalf of Harvey Weinstein and his lawyer to bribe her not to go public with her rape allegations against Weinstein just months before the news broke in 2017.

“Sunday @ 1pm, Rose McGowan and I [are] holding a press conference. Rose will detail how Gavin Newsom’s wife, Jennifer, attempted to bribe and silence her from speaking out about Harvey Weinstein’s sexual abuses,” Elder tweeted on Saturday.

Elder later tweeted again, calling out some mainstream media outlets by name and alerting them to the forthcoming press conference.

McGowan said she did not know Jennifer Newsom before receiving a random phone call from her approximately six months before the New York Times expose on Weinstein was published.

“This woman I don’t know, some blonde lady with a last name of Newsom, cold calls me and is like, ‘David Boies wants to know what it would take to make you happy,'” McGowan said. Weinstein was a client of David Boies, a high-profile lawyer who also represented Bill and Hillary Clinton.

McGowan said she reluctantly agreed to meet with Newsom but changed her mind and drove away without getting out of the car, having seen Jennifer Siebel Newsom and being “creeped out.”

“Remember when you @JenSiebelNewsom asked me on behalf of Weinstein’s gross lawyer ‘What it would take to make me happy?’ Gavin Newsom’s wife has some explaining to do. #lizard,” McGowan tweeted.

“Governor Gavin Newsom, you’re facing a recall because you’re a fraud, just like your wife Jennifer Siebel Newsom,” McGowan said. “I have the receipts. I wish I didn’t. I wish you were all real. I wish you really did help, but you don’t, and you’re on the side of wrong.”

“What is being alleged is a complete fabrication,” Newsom’s spokesperson said. “It’s disappointing but not surprising to see political opponents launch these false attacks just days before the election. Their limited correspondence has been strictly as fellow survivors of sexual assault and in Jennifer’s former capacity leading the Representation Project, an organization that fights limiting gender stereotypes and norms.”