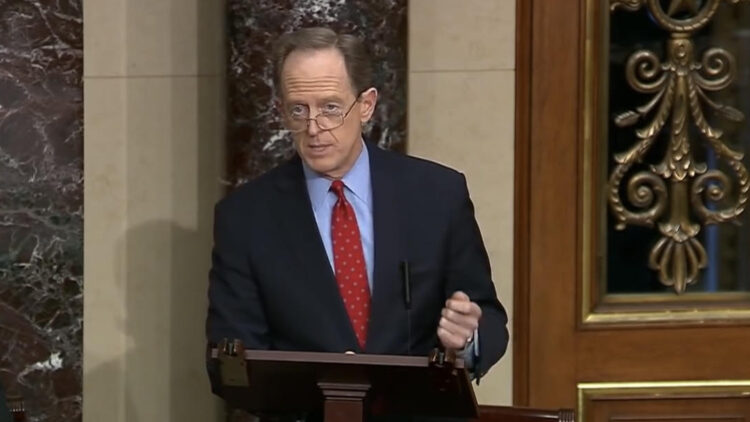 Senator Pat Toomey (R-PA) urges his party not to nominate Trump in the 2024 presidential race.

“I think after what happened post-2020 election, I think the president’s behavior was completely unacceptable,” Toomey said to CNBC at Italy’s Ambrosetti Forum on Friday. “So I don’t think he should be the nominee to lead the party in 2024.”

“I think that the future of our party is to be a party of ideas and not to be a party about any one individual, and I think we will learn a lot from the next set of primaries,” Toomey added. “There’s no one obvious candidate, but there are many, many people who could do a fantastic job.”

Toomey, who has a staunchly conservative voting record and largely supported Trump’s agenda, broke with the former president over his reaction to the 2020 election results. Toomey then became one of seven Republican senators who voted to convict Trump on an impeachment charge of inciting an insurrection at the U.S. Capitol. Following the impeachment, Toomey was threatened with censorship by his state party, though he ended up receiving only a “strong rebuke.”

Toomey, however, has not backed down from criticizing Trump.

“It is President Trump who departed from Republican orthodoxy and conservative orthodoxy in a variety of ways. I stuck to the conservative views that I’ve had for a long time. He had a different point of view on matters such as trade and sometimes immigration and other things.”

Trump has not yet said whether he will attempt a third bid at the presidency, though he has hinted several times that he will run. Yesterday, Jason Miller, a senior adviser to the former president, said it’s “pretty clear” that Trump will run. On Thursday, Rep. Jim Jordan (R-OH) said he expects Trump to announce his candidacy “any day now.”

Toomey announced his retirement earlier this year, leaving his seat open. Currently, the seat is rated as the only “toss-up” in the country by Sabato’s Crystal Ball, meaning it could plausibly be won either by a Republican or a Democrat. While Toomey has not endorsed a potential successor, Trump endorsed Sean Parnell in the race, saying the 2020 House nominee and veteran “never left anyone behind,” unlike “our current administration.”

The 2022 U.S. Senate race in Pennsylvania will take place on Tuesday, November 8. Senator Pat Toomey’s office did not respond to the Independent Chronicle’s request for comment.