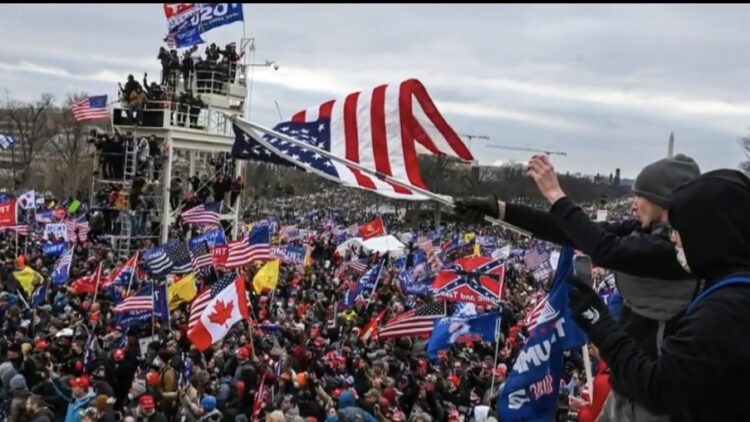 Republican lawmakers holding a press conference outside the Department of Justice Tuesday were met with a group of protesters waving signs calling the lawmakers “traitors,” “rapists,” and “pedophiles.”

“We are not deterred,” Rep. Marjorie Taylor Greene (R-GA) said after being interrupted by a protester. “For anyone that’s here being an activist and yelling today, here’s a statement that I need everyone to understand – we will not back down, we will not stop asking questions, we are looking for the truth.”

“We’re wondering why questions that have been asked by colleagues for months have gone unanswered,” Gaetz said. “Antifa and BLM set fires to this country for months and we did not see an interest from federal law enforcement on those claims. I’m happy to be joined by my colleagues here. We want to know how the detainees are being treated inside the jail. We would like to know many other things.”

Also on Tuesday, the House select committee gathered to listen to Capitol police officers’ testimonies about what they experienced on January 6th. Meanwhile, the group of GOP lawmakers described the abuses Capitol rioters have faced since being detained, including claims that they were beaten by guards and put in solitary confinement.

Shortly after Greene and Gaetz’ comments, the press conference was halted and the lawmakers were escorted away from the DOJ. Gohmert addressed pro-Trump activists who were in attendance, saying thank you to those who “really care about due process.”

“The fact that so many members of our leadership and others, the fact that they’ve gone from recognizing what happened on the 6th to protesting in front of the DOJ on behalf of those who are part of the insurrection, is something I can’t explain,” Cheney said.

Tuesday’s press conference follows a letter sent to Attorney General Merrick Garland on Sunday by four of the Republican lawmakers. In the letter, they request a meeting with Garland, saying they’d like to discuss the status of the “Jan. 6th prisoners and related investigations.” The lawmakers also detail several of their own attempts to acquire information on the protesters, as well as other concerns.

“We would also like to discuss why we were not warned that ‘armed extremists were planning mayhem’ on January 6th,” the lawmakers wrote. “Ms. Pittman testified on February 25th this year that her office was notified in advance that ‘armed extremists’ were targeting the peaceful rally, and potentially targeting us, as members of Congress. Yet we received no notice of this threat.”

Garland’s office has neither confirmed nor denied whether he will agree to meet with the group of GOP lawmakers.