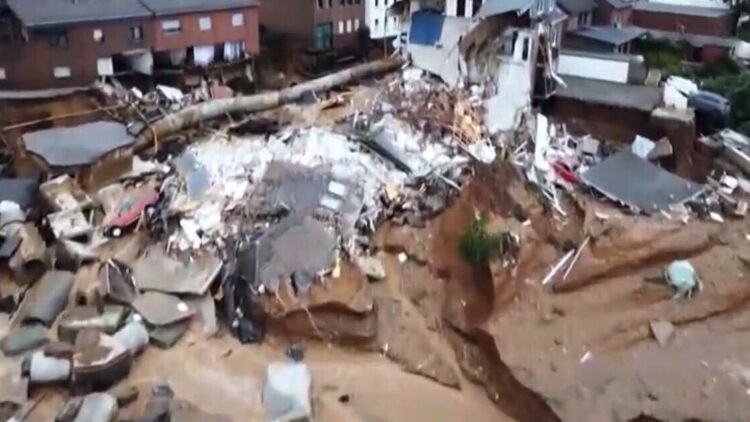 A reporter was fired after smearing mud on herself before taping a segment on the flooding and clean-up efforts in Germany this week.

Video footage shows RTL reporter Susan Ohlen rubbing dirt on her face and body to make it appear as though she helped with flood clean-up. “Cleaning up after the flood: RTL presenter lends a hand in Bad Munstereifel” the headline read.

The network fired Ohlen, 39, after a bystander posted footage of her deception online.

“Our reporter’s approach clearly contradicts journalistic principles and our own standards. We, therefore, gave her a leave of absence on Monday after we heard about it,” RTL said in a statement.

Ohlen is seen in boots and loose clothing, holding a shovel and a pair of gloves while surrounded by debris and flood-damaged buildings. Twice she bends over to smudge her face and clothes before facing the camera.

Ohlen, a reporter and TV host with RTL since 2008, had been featured on many programs including Good Evening RTL, Good Morning Germany, and Point 12.

She issued an apology for her conduct on Instagram. Translated, her statement reads, “After I had already privately helped out in the region on previous days, on that morning I was ashamed to appear on camera in front of the other aid workers with a clean upper body, so I unthinkingly smeared mud on my clothing. This should never have happened to me as a journalist. It happened to me as a person whose heart was touched by the suffering of all those affected.”

During the flooding and aftermath, large search and rescue efforts were made to locate survivors in Belgium, the Netherlands, Germany, and France, but 176 people are still missing. German officials say the likelihood of finding and rescuing those people is not high.

The death toll across the affected countries currently stands at 205. Over half of those casualties were in Germany’s most heavily affected area, and 46 were in the highly-populated North Rhine-Westphalia. Both citizens and firefighters have died in the floods.

The heavy rainfall and subsequent flooding are some of the worst that Germany has experienced, and flood damages are expected to total billions of euros.