Report: Colorado board outlawing use of term ‘sex offender’ 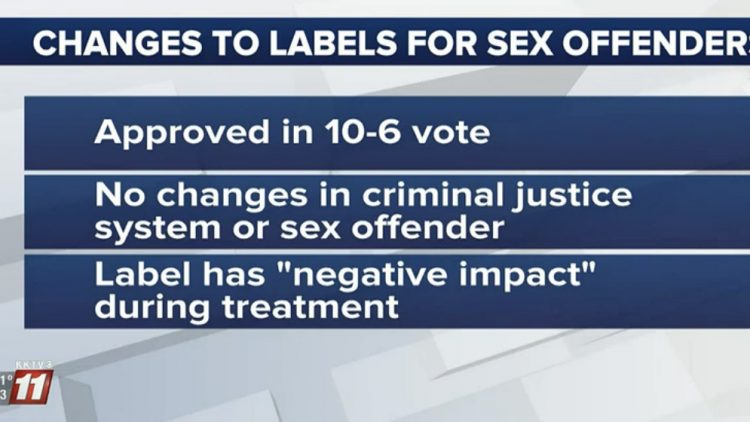 Colorado’s Sex Offender Management Board voted Monday to no longer recognize the term “sex offender” in its guiding principles and policies.

“I think the biggest thing is research really shows us that assigning a label has the potential for negative effects in rehabilitation,” said Kimberly Kline, chair of the Sex Offender Management Board (SOMB). The board is considering exchanging the term for “adults who commit sexual offenses” and “who engage in sexually abusive behavior.”

Ironically, SOMB will not drop “sex offender” from its name.

“The term ‘sex offender’ will continue to be used in Colorado statute and the criminal justice system, including courts, law enforcement, and the Colorado Sex Offender registry,” a SOMB spokesperson said. “The change being considered is limited in scope and applies only to the language used in the standards and guidelines for treatment providers who assess, evaluate, and treat people convicted of sexual offenses.”

Proponents of the change seem to believe that victims of violent sex crimes are indifferent to the labels of their perpetrators.

“I understand from somebody who has been victimized, the nuance of the argument that we’re having, or the discussion that we’re having, probably doesn’t make a lot of difference to them,” Chris Lobanov-Rostovsky, project manager of SOMB, said. “They were harmed, and that’s all they care about, and they just want to see the person held accountable and punished for that…I’m very understanding of people who might think this could go too far, or has gone too far, and I think the board is struggling with that and trying to balance the interest of both sides.”

Proponents believe a transition to “person-first” language will enable sex offenders to become rehabilitated. They compare the use of the term “sex offender” to calling someone with autism “autistic.”

“Lobanov-Rostovsky’s statements comparing people who are born with learning disabilities to sex offenders who have taken affirmative steps to sexually violate another person are disgusting,” said District Attorney Michael J. Allen. “The Sex Offender Management Board should spend its valuable time on finding effective ways to treat a challenging group of convicted criminals, rather than coming up with new ways to label them.”

“Words have meaning, and actions have consequences and labeling someone a sex offender after they have been convicted of a sex offense recognizes the gravity of committing sex offenses,” Allen added.

A spokesperson for Colorado’s Sex Offender Management Board did not return the Independent Chronicle’s request for comment.