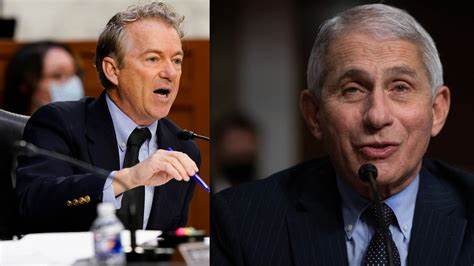 Sen. Rand Paul (R-KY) called for Dr. Anthony Fauci to be jailed, claiming he broke the law by lying to Congress about the National Institutes of Health (NIH) funding coronavirus research in Wuhan, China.

“It’s a felony punishable by five years in jail. We’ve referred it to the Department of Justice. I don’t think Biden’s Department of Justice will do anything with it, but yes, it is very dangerous to have public officials, who we need to have trust in, coming and lying to us,” Paul told Fox News host Sean Hannity.

Paul said that the newly leaked documents that emerged this week reveal that the NIH funded coronavirus research in Wuhan. Fauci claimed in May that the NIH hadn’t funded such research at the lab. Paul said that Fauci’s lying is a felony – punishable by up to five years in jail.

The senator claimed that the documents reveal that the virus came out of a biosafety level-3 lab, which he says nobody believes is secure enough for dangerous pathogens. Researchers at the lab modified the virus to be more transmissible, known as “gain of function” research, according to Paul.

Paul also noted that in 2012 Fauci admitted gain of function research was worth the risk of it potentially causing a pandemic. He called on Fauci to be removed from government and said it was astounding that someone with that point of view had a job in government in the first place.

“I have already asked the DOJ to review Fauci’s testimony for lying to Congress. This report should make it abundantly clear that he needs to be held accountable,” Paul tweeted Tuesday.