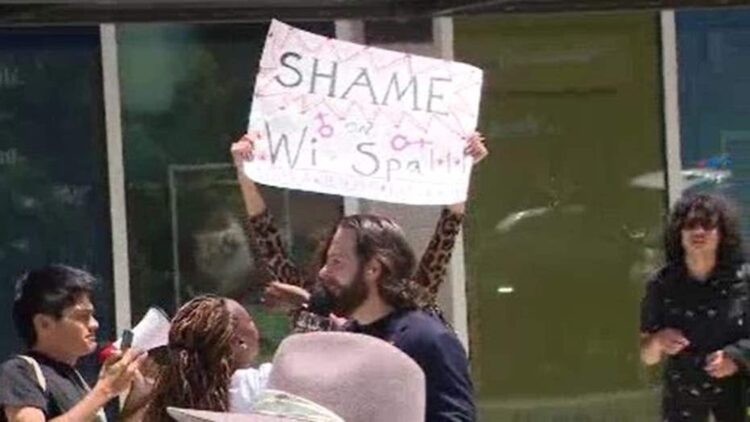 Violent protests broke out at a Los Angeles spa after a woman filmed herself complaining to management over them allowing a biological male to expose himself to young girls and adult women in the women’s area.

“Three of them were victims of assault and battery, and the other two were assault with a deadly weapon,” LAPD Officer Mike Lopez, a spokesman with the LAPD, said of the injured protestors.

A group of protestors formed outside of Wi Spa to show support for the woman who filmed herself confronting the spa’s management after a grown man was seen exposing himself to the girls and women in the women’s area of the spa. The man is a transgender woman, therefore, the spa claims they can not prevent him from entering the women’s area.

The group was quickly met with counter-protestors carrying flags, wearing vests and masks, and even some carrying weapons. They chased one man down the street who was wearing an “Obey Jesus” shirt, hitting him in the head causing his face and chest to become covered in blood. Another woman claimed to have been stabbed during the fighting.

Two men were also seen being hit by people wearing all-black clothes and masks. Some of the brawlings occurred in the street as traffic was forced to dodge and maneuver around the fighters. A dumpster was dragged into the street and lit on fire shortly before police arrived.

The protests were in reaction to an irate woman’s video complaining about women being forced to see a man “with a d–k” exposing himself to them in the women’s area of the spa last month.

RELATED: Woman furious at spa for letting man enter the women’s section: ‘What sexual orientation? I see a d**k’

“So it’s okay, I just want to be clear with you, it’s okay, it’s okay for a man to go into the women’s section, show his penis around the other women, young little girls under age? Your spa, Wi Spa, condoned that. Is that what you’re saying?” the woman asks an employee at the front desk of the spa in the video that now has over 940,000 views.

A man is seen approaching the woman in an effort to defend the male who just exposed himself to girls and women, saying, “You’re talking about a transgender person?” The angry woman then responds, saying, “He has a d–k, okay? He has a penis. His penis is hanging out.”

“You’re being a d***,” the man responds to the woman. She snaps back, saying, “No, I’m not one… Actually, I’m a woman who knows how to stand up and speak up for my rights. As a woman, I have a right to feel comfortable without a man exposing himself.”

Wi Spa put out a statement regarding the incident, noting California law allows transgender individuals to use facilities they identify.

“As a spa located in Los Angeles, Wi Spa complies with California law prohibiting discrimination by a business, including the Civil Code provision set forth above,” the statement reads. “Like many other metropolitan areas, Los Angeles contains a transgender population, some of whom enjoy visiting a spa. Wi Spa strives to meet the needs and safety of all of its customers, and does not tolerate harassment or lewd conduct by any customer, regardless of their sex, gender, or other characteristic.”